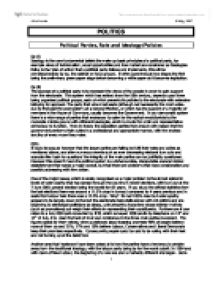 Political Parties, Role and Ideology/Policies Qa (i) Ideology is the core fundamental beliefs the make up basic principles of a political party

POLITICS Political Parties, Role and Ideology/Policies Qa (i) Ideology is the core fundamental beliefs the make up basic principles of a political party, for example views of individualism, equal opportunities and free market are considered as Ideologies. Policy is the 'plan of action' that a political party follows and implements, this will be compiled/decided by eg. the cabinet or focus groups. It often goes through two stages the first being the preliminary green paper stage before becoming a white paper as it becomes legislation. Qa (ii) The purpose of a political party is to represent the views of the people in order to gain support from the electorate. This system which has existed since the 18th century, depends upon there being organised political groups, each of which presents its policies to the electorate with extensive lobbying for approval. The party that wins most seats (although not necessarily the most votes- due to first past the post system) at a General Election, or which has the support of a majority of members in the House of Commons, usually becomes the Government. In our democratic system there is a wide range of parties that endeavour to cater for the radical revolutionists to the moderate middle ground with different ideologies, which is crucial for a fair and representative democracy to function. Then in theory the opposition parties then ensure with reason that the government performs their duties in a professional and appropriate manner, with the endless scrutiny of every move they make. ...read more.

New Labour on the other hand has come to accept that the class system has broken down and that this old fashioned concept of segregation between the classes is no longer true in our modern society. People identify less with a specific class; they are more interested in their own personal issues. New Labour has come to recognise this. Also, the attitude towards collectivism has shifted a lot. Old Labour believes that people enjoy working collectively to achieve a common goal. New Labour has come to accept that people nowadays are actually more interested in working towards their own personal goals, than towards collective goals. An example of this is the welfare state. This was and to an extent still is a symbol of collectivism, however, nowadays; New Labour tries to implement policies that encourage individuality, for instance, owning your own home. The welfare system has been restructured to promote self-reliance rather than dependency on the state. The concept of equality has also changed. Old Labour was quite keen to stress that it did not try and impose equality; it rather tried to reduce inequalities. New Labour has changed this view by accepting that in a free market capitalist state inequality will grow. It has however, implemented safeguards to ensure that people do not fall below a certain standard of living. The concept of equality is no longer seen in the same light as it was before; it has lost some of its previous importance. ...read more.

One cannot be confused about the nature of political parties, they are not in the business of getting ethics awards, they are in a fight for votes. A totally dog eat dog world, they cannot afford to take too much consideration into their moral obligation to provide a real choice, that is if its their moral obligation. Hence one now has to refer back to the question 'Do the Labour and Conservative Parties offer a sufficient difference in policies to give the voter a real choice'? If you look at the specific detail you could well argue they don't with them being policy wise similar, but in reality the similarities can only be expected, an rationally speaking you cant really do anything about it. Does the answer then not depend on your opinion as to what role political parties should fulfil and in what way it should conduct itself and from that one can conclude whether you think that they offer a real choice. If you think they should cater for the masses in general you may well believe they offer a real choice, but on the other hand if you believe they should endeavour to cater for a much wider range of opinions and views you may well feel they don't offer a real choice. Therefore there seems to be no clear answer, and that it may simply come down to personal opinion and preference, because after all what the parties are trying to do is represent peoples opinions, and its just how they do this that is up for debate. ...read more.