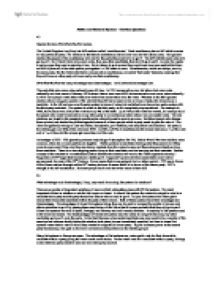 Politics and Electoral Systems - Revision Questions a.) Explain the term First-Past-The-Post system. The United Kingdom is split up into 659 sections called 'constituencies.' Each constituency has an MP which runners for any particular party. For instance in the Stroud constituency David Drew runs for the Labour party. At a general election the people of the constituency will vote for the party they want to be in gov't. The MP with the most votes will go to par't. So if David Drew wins more votes, than any other candidates, then he will go to par't. In order for a party to go to power they need a majority of one. So for labour to go to power they would need one more seat (which there are 659 of) than all of the other parties put together i.e. 330 seats or more. Constituencies, which are always, won by the same party, like the Cotswolds that is a conservative constituency, are called 'Safe seats' basically meaning that they will have no other party will ever really win that constituency. ...read more.

No party in the UK has got over 50% of the vote since 1935. In 2001, in 87% of constituencies the winner had only a 1/3 of the vote and in 1/12 of these did the winner get more than 1/4 of the vote. Advantages of FFP. FFP generally produces majority gov't (exception Feb 74). Before World War two coalition were common, when two or more parties join together. Parties produce a manifesto showing what they plan to do if they come to power and if they win they can claim a mandate from the voters to carry out there aims and objectives from there manifesto. There is no law stopping parties lying in their manifesto, and not carrying out their mandate. But the concept of the mandate is a constitutional fiction because the elections are won by the 'Best organised minority.' Supporters of FFP argue that it produces a stable gov't. ...read more.

In the East Germany a top ranked candidate was uncovered to be a member of the secret police informer shortly before the election took place, he was immediately expelled, but dew to closed list systems voters had to vote for him if they wanted to support his former party. It gives immense power to the central party bureaucracy, who gets on the list or not and (crucially) where on the list they get put. Many list systems in Europe are open. The advantages of list systems are; voters get to vote for their favourable candidate within a party giving the voters much more choice. As the voters vote for a candidate within a party, it brings rivalry between party members and can form intra-party conflict. The additional member system; There are no by-elections. There is much more choice for the voters as they can split their vote which may be more accurately represented voters choice. Constituencies are bigger. It does however give disproportional power to the smaller parties. The parties choose the government not the voters. ...read more.