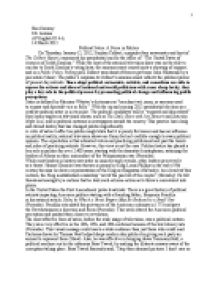 Politics and Satire. In the United States the First Amendment protects satirists. There is a great history of political satirists impacting American politics

﻿Ben Conway Mr. Jenkins AP English III 4-A 14 March 2012 Political Satire: A Force in Politics On Thursday, January 12, 2012, Stephen Colbert, a popular faux newscaster and host of The Colbert Report, announced his presidential run for the office of ?The United States of America of South Carolina.? While the host of the satirical television show was not be able to run due to South Carolina?s voting laws, the announcement caused quite a showing of support, and in a Public Policy Polling poll, Colbert was ahead of former governor John Huntsman by a percentile (Shaw). The public?s response to Colbert?s announcement reflects the political power of present day satirists. Since adept political cartoonists, satirists, and comedians are able to expose the actions and ideas of national and world politicians with razor sharp levity, they play a key role in the political process by promoting political change and influencing public perceptions. Satire is defined by Merriam-Webster?s dictionary as ?trenchant wit, irony, or sarcasm used to expose and discredit vice or folly.? With the up and coming 2012 presidential election as a catalyst political satire is in its prime. ...read more.

His show brings in an average viewing audience of 1.8 million per show (Rosenstiel). Likewise, when Stewart and Colbert announced a Rally to Restore Sanity and/or Fear in Washington, DC, a crowd, estimated at 200,000, filled the National Mall (See Figure 1). Approximately the same amount of people that showed up to hear Dr. Martin Luther King Jr.?s famous ?I have a Dream? speech in 1963. The outreach of his show helps expose hypocrisy to all of America by utilizing extensive video archives and pairing a politician?s previous statement with a contradictory one said by the same politician. As Syracuse University Journalism Professor Hub Brown said, "The stock-in-trade of 'The Daily Show' is hypocrisy, exposing hypocrisy. And nobody else has the guts to do it" (Smolkin). The beauty of satire is that it does not have to be politically correct, so this allows shows like The Daily Show to get down to the truth of a matter in a way that other news sources cannot (Smolkin). That is one of the reasons satire is so effective in promoting political change because it pushes the boundaries (?The Daily Show with Jon Stewart?). ...read more.

A Charlie Hebdo cartoonist named the prophet Muhammad its editor for the week with a picture of Muhammad on the cover and the caption ?100 lashes if you don?t die laughing? (Navasky). An explosive reaction that can come from a piece of satire when a reader is compelled enough by a cartoonist?s work to attempt murder. Are politicians also supposed to go along with the joke? Is there a line to be crossed there, too? One controversy in this category followed the release of a song by the Republican National Committee, ?Barack the Magic Negro? sung to the tune of Puff the Magic Dragon (?Satire, Race, and the Magic Negro?). The First Amendment protects this type of offensive satire legally, but it is a moral question satirists must consider. Satire has been an active participant in the government for years, playing the role as the provocateur, the watchdog, the revolutionary, the reformer, and the entertainer. Without satire playing all of these roles, the modern political landscape would not be the same. Since satirists are able to expose the actions and ideas of national and world politicians, they play a key role in the political process by promoting political change and influencing public perceptions. As satire continues to expand its influence on politics one day we might even see President Colbert. ...read more.