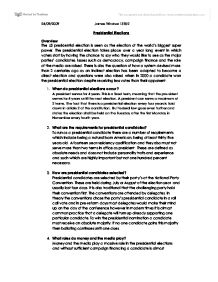 This is evident by the huge news coverage of the American elections from all over the globe but especially in America where the main news papers run their own opinion-editorial pages regularly. Many TV programs run 24 hour a day news coverage on the elections as well as political comment programmes as well as the above mentioned chat show phenomenon. As well as this Americans are heavily influenced by things such as political commercials due to the TV culture that has developed in America, and lastly televised debates can have a large effect on the presidential elections they have however been criticized as often style is more important than substance in many of these debates. 5. What factors explain voting behaviour? 50% of the American population that are eligible to vote, exercise this right and their votes are influenced by a number of factors. > Party Affiliation - Despite all that has been said about the weakness of the US party system. Statistics show that it does have an influence on the overall election. "11 out of the 13 elections from 1952 to 2000 have been won by the party that managed to gain the highest level of support from its own identifiers" > Gender - Statistics have shown that in nine out of the ten elections between 1964 and 2000 woman were significantly more supportive of the democrat candidate than men. ...read more.

7. What happens if a president dies in office? If a president dies in office, then the vice president automatically takes over, for example, when President Kennedy was assassinated in November 1963, Vice President Lyndon Johnson automatically became president and completed the remaining of Kennedy's term, which was held in 1964. 8. Presidential elections can be split into four stages; > Primaries and Caucuses - These allow people to show popular support for candidates and delegates are selected to attend National Party Conventions. They are usually held in Late January - early June > National Party Conventions - These are held so that presidential and vice presidential candidates can be selected and a party platform can be decided upon. These are usually held in July/August and they last about 4 days. > General Election Campaign - This is the campaign between the chosen candidates of various parties and lasts from September through to the first week of November. > Election day and Electoral College - This is the election of the president and vice president and usually is held from November/December Individuals vote for who should be president, which means they vote directly for their executive, unlike in Britain, where the leader of the party with a majority is put in charge. In America the Electoral College then rubber stamps this with delegates voting as well. ?? ?? ?? ?? 24/09/2009 James Windsor 13TU2 ...read more.