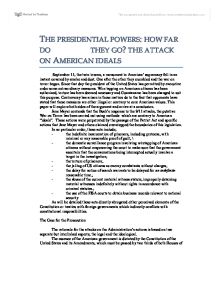 presidential power how far does it go

THE PRESIDENTIAL POWERS: HOW FAR DO THEY GO? THE ATTACK ON AMERICAN IDEALS September 11, the twin towers, a monument to Americas' supremacy fell in an instant covered by smoke and dust. One after the other they crumbled and the war on terror begun. Since that day the president of the United States has permitted by executive order some extraordinary measures. Wire tapping on American citizens has been authorized, torture has been deemed necessary and Guantanamo has been changed to suit this purpose. Controversy has arisen in these matters do to the fact that opponents have stated that these measures are either illegal or contrary to core American values. This paper will explore both sides of the argument and arrive at a conclusion. Jane Mayer contends that the Bush's response to the 9/11 attacks, the putative War on Terror has been carried out using methods which are contrary to American "ideals". These actions were perpetrated by the passage of the Patriot Act and specific actions that Jane Mayer and others claimed overstepped the boundaries of this legislation. In no particular order, these acts include; - the indefinite incarceration of prisoners, including preteens, with minimal or any reasonable proof of guilt; \ - the domestic surveillance program involving wiretapping of American citizens without empowering the court to make sure that the government ascertain that the conversations being intercepted actually involve a target in the investigation; - the torture of prisoners; - the jailing of US citizens as enemy combatants without charges; - the delay for notice of search warrants to be delayed for an indefinite reasonable time.; - the abuse of the current material witness statute, improperly detaining material witnesses indefinitely without rights in accordance with criminal statutes.; - the use of the FISA courts to obtain business records relevant to national security As will be detailed these acts directly abrogated either perceived elements of the Constitution or treaties with foreign governments which indirectly conflicts with constitutional responsibilities. ...read more.

A half century later, the world is a much small place, and the time frame for making decisions has shrunk accordingly. John Yoo (11,14) of the Justice Department, contends that the centralization of authority is particularly "crucial in matters of national defense, war and foreign policy where a unitary executive is in the best position to evaluate threats, consider policy choices and mobilize national resources". Day to day choices in a time of war are no place for long winded public discourse. However, if we are questioning whether current acts are in opposition to the ideals of the state - the term ideals is so vague as to at times be either pretentious or irrelevant. What good are ideals if there is anarchy? What good are ideals if they endanger society as a whole. The real ideal of the American system is that checks and balances provide an ideal government. In this context, perhaps the best source of this defense is Alexander Hamilton's Federalist Paper #70. "Energy is the leading character of good government". Furthermore, he adds; "It is essential to the protection of the community against foreign attacks." It is not less essential to the steady administration of the laws, "to the protection of property against the enterprises and assaults of ambition, of faction and of anarchy". Herein, lies the ideal - to preserve the greater good, sometimes the president has the responsibility of acting. Thus, the republic was set up with "the favor of a single executive and a numerous legislature". "Decision, activity, secrecy and dispatch will characterize the proceedings of one man in a much more eminent degree than the proceedings of any greater number". Let us for one moment concentrate on the word: SECRECY. In times of war one does go about discussing strategies in the public domain. And the more involved in the decision making process the more likely leaking of sensitive information. ...read more.

70 (19)that "Men oppose a thing, merely because they have no agency in planning it, or because it may have been planned by those they dislike." "They seem to think themselves bound in honor and by all motives of personal infallibility to defeat the success of what has been resolved upon contrary to their sentiments." The debate on the issues has descended into a cacophonous row of partisan politics. It is hard to remember that the Patriot Act was passed by massive majorities in both Houses of Congress. During the Reagan administration, a congressional committee investigated the Iran-contra affair and submitted a report (Schultz pg 159) split "sharply on partisan grounds" with the minority report supporting the Reagan administration and condemning unlimited Congressional power. In March 1999, President Clinton approved the unilateral bombing in Kosovo (to prevent genocide) without clear Congressional authorization. Many of those same congressmen who voted against Reagan's actions, affirmed Clinton's, and now again condemn Bush's imperial presidency. The key word in all this is partisan. The system of law is one of evolution. The laws of war have changed. The laws of fighting these wars are also in flux. Is there a perfect solution to defining this change? Obviously not. Mistakes have been made. But therein, lays the glory of the system of checks and balances. Court challenges have been pursued - some won, some lost. Laws have been modified and will be modified by Congress. My contention is that Ms. Mayer has too narrowly defined the term ideals. She is missing the forest for the trees. For our purposes, the Constitution is the Ideal. I describe it as a symbiotic system made up of three parts. For the system to survive all three elements must work together. The current crisis has come to prove that this Ideal is still a vibrant system. It evolves over time; with each of the three components nurturing their partners and helping the others perform optimally. It is because the system can survive, that all those rights and other ideals that are derived from within it can also survive. ...read more.