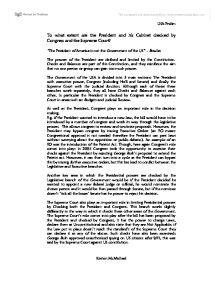 To what extent are the President and his Cabinet checked by Congress and the Supreme Court? "The President of America is not the Government of the US" - Bowles The powers of the President are defined and limited by the Constitution. Checks and Balances are part of this Constitution, and they reinforce the aim that no one person or group can gain too much power. The Government of the USA is divided into 3 main sections: The President with executive power, Congress (including HoR and Senate) and finally the Supreme Court with the Judicial function. Although each of theses three branches work separately, they all have Checks and Balances against each other, In particular the President is checked by Congress and the Supreme Court in areas such as: Budgets and Judicial Review. ...read more.

Another key area in which the Presidential powers are checked by the Legislative branch of the Government would be if the President decided he wanted to appoint a new federal judge or official, he would nominate the chosen person and it would be then passed through Senate, but if the nominee doesn't 'tick all the boxes' Senate has he power to reject his decision. The Supreme Court also plays an important role in limiting Presidential powers by Checking both the President and Congress. This branch works slightly differently in the way in which it checks these other areas of the Government. The Supreme Court's role comes into play after the bill has been proposed by the President and checked by Congress, It has the power to change Laws, declare them as Unconstitutional and also state that they are Not Applicable. ...read more.

Most famous for using the Veto to override decisions made is George W. Bush. During his 8 year long period in cabinet he Vetoed 12 bills and also produced 1 pocket Veto - 4 of which were again overridden by Congress, Congress has a limited power to override a Presidential Veto, if they wish to carry out this check on the President their branch of Government have to receive a 2/3 majority in the House - if not the Veto stays in place. Taking all of my points into consideration I can conclude that the President of the US does have a great deal of power in his hands but every single decision he makes is checked vigorously checked by another branch of the Government thus putting very extreme limitations on his work as the President. ?? ?? ?? ?? USA-Prelim Kirsten McMichael ...read more.