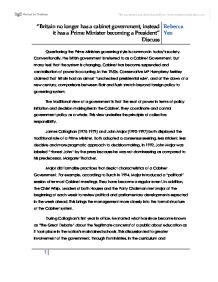 Prime Ministerial Power. Conventionally, the British government is referred to as a Cabinet Government, but many feel that the system is changing. Cabinet has become suspended and centralisation of power is occurring.

Questioning the Prime Ministers governing style is common in today's society. Conventionally, the British government is referred to as a Cabinet Government, but many feel that the system is changing. Cabinet has become suspended and centralisation of power is occurring. In the 1960s, Conservative MP Humphrey Berkley claimed that Britain had an almost "unchecked presidential rule", and at the dawn of a new century, comparisons between Blair and Bush stretch beyond foreign policy to governing system. The traditional view of a government is that the seat of power in terms of policy initiation and decision making lies in the Cabinet. They coordinate and control government policy as a whole. This view underlies the principle of collective responsibility. James Callaghan (1976-1979) and John Major (1990-1997) both displayed the traditional role of a Prime Minister. Both adopted a consensus-seeking, less strident, less decisive and more pragmatic approach to decision making. In 1992, John Major was labeled "Honest John" by the press because he was not domineering as compared to his predecessor, Margaret Thatcher. ...read more.

When discussing presidency, the American model is preferred, as it is the most dominate of presidential models in the world. It is true that British Prime Ministers are becoming presidential. Take for example, Tony Blair tried to be "the voice of the people" and thus changed the role to that of a statesmen rather than party politician. This was seen after Princess Diana's death in 1997 when Blair led the nation's mourning and spoke openly about the Diana being the "People's Princess". Another example was the Iraq War 2003; he did not follow his party's wishes and instead followed a course of action that he strongly believed was morally and politically justified. In relation to the presidential role of a British Prime Minister, his power of patronage gas increased greatly. Similarly, the President appoints almost 4000 officials. The appointment of Lord Chancellor ensures that the Prime Minister is not allowed a voice in the House of Lords, but he also has the opportunity to expand his power of patronage. ...read more.

In conclusion, there is a momentous debate as to whether the Prime Minister has become more presidential. Within the British constitution, it is possible for Prime Ministers to stretch the power of the office and make the post their own. This explains why certain Prime Ministers have had a clear influence such as Thatcher and Blair while others do not. Perhaps it is essential to look at the definition of president and whether Britain is ready to change its traditional constitution into one that is similar to America. Like what Tony Benn said "The present centralisation of power into the hands of one person has gone too far and amounts to a system of personal rule in the very heart of our parliamentary democracy" Many people consider the role of the Prime Minister has changed but it is believed that in the future, Britain will have its own model of presidency and perhaps elements of a Cabinet government. ?? ?? ?? ?? "Britain no longer has a cabinet government, instead it has a Prime Minister becoming a President" Discuss Rebecca Yeo 1 ...read more.