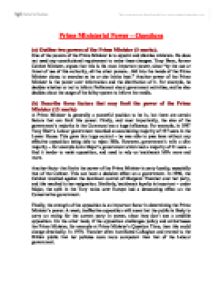 Prime Ministerial Power - Questions (a) Outline two powers of the Prime Minister (5 marks). One of the powers of the Prime Minister is to appoint and dismiss ministers. He does not need any constitutional requirement to make these changes. Tony Benn, former Cabinet Minister, argues that this is his most important power, since "by the use or threat of use of this authority, all the other powers...fall into the hands of the Prime Minister alone; to exercise as he or she thinks best." Another power of the Prime Minister is the power over information and the distribution of it. For example, he decides whether or not to inform Parliament about government activities, and he also decides about the usage of the lobby system to inform the media. (b) Describe three factors that may limit the power of the Prime Minister (15 marks) A Prime Minister is generally a powerful position to be in, but there are certain factors that can limit this power. Firstly, and most importantly, the size of the government's majority in the Commons has a huge influence. For example, in 1997 Tony Blair's Labour government recorded an astonishing majority of 197 seats in the Lower House. This gave him huge control - he was able to pass laws without any effective opposition being able to reject Bills. ...read more.

Secondly, the increasing politicisation of the civil service, particularly its information services, is seen by many to be another way in which Blair is exercising Presidential powers. Whilst John Major only had eight special advisors, Tony Blair has twenty. Alistair Campbell's appointment after the 1997 election as the Prime Minister's official spokesman was clearly a political one. Yet, he is also a civil servant. It is this blurring of the boundaries between party politics and civil service neutrality that is cause for concern. In the same way, Thatcher had appointed Bernard Ingham as a 'press officer.' He was supposed to be independent of political parties, and yet he turned it into a personal role to suit Margaret Thatcher's view of world politics. Furthermore, the relegation of the role of the cabinet, and Blair's preference for dealing face to face with responsible ministers, raises serious questions. Margaret Thatcher was accused of doing the same thing. She frequently by-passed the formal cabinet, entrusting many important decisions to sub-committees. The demise of the British cabinet as an effective institution of government was pronounced as long ago as 1963, when the Labour MP (and later Cabinet Minister) claimed that the doctrine of 'collective responsibility' meant no more than 'collective obedience' to the will of the Prime Minister. ...read more.

Robin Cook and Clare Short both resigned on principle over Iraq. In September 2004, Work and Pensions Secretary Andrew Smith - a known 'Brownite' - resigned before being sacked. Lastly, the behaviour of the Prime Minister strongly suggests a Presidential style of leadership. For example, it now seems that Tony Blair took Britain into the war against Iraq despite well-founded warnings from the Foreign Office, as well as strong misgivings from several ministers. Unlike the British Prime Minister, the US President is commander-in-chief of his armed forces, but any casual observer of the Falklands War would have been forgiven for thinking that Margaret Thatcher performed that role, and during the war on Iraq, the British Commander Queen Elizabeth was clearly absent from any role. Other observers might also note another huge similarity between Blair and Thatcher's leadership style - both had extremely close relationships with the US Presidents of the time, Thatcher with Ronald Reagan and Blair with George Bush. To conclude, in recent years Prime Minister's have become more 'Presidential-like' in recent years - especially in the case of Tony Blair. However, it is worth noting that our system does allow for a pure President. This is for two reasons - firstly, we have a constitutional monarchy who is Head of State. Finally, and most importantly, we do not have a separation of powers as is the case in a Presidential system - the executive is drawn straight from the legislature. ...read more.