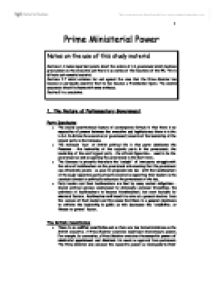 Prime Ministerial Power Notes on the use of this study material Sections 1-3 make important points about the nature of UK government which bestows great power on the executive and there is an outline of the functions of the PM. This is all basic and essential material. Sections 4-7 detail evidence for and against the view that the Prime Minister has become so personally powerful that he has become a Presidential figure. The central arguments should be known with some evidence. Section 8 is a conclusion. 1. The Nature of Parliamentary Government Party Dominates o The crucial constitutional feature of contemporary Britain -is that there is no separation of powers between the executive and legislature as there is in the U.S.A. In Britain the executive (or government) consists of the leadership of the largest party in the Commons. o The dominant 'fact' of British political life is that party dominates the Commons - the leadership of the majority party is the government; the leadership of the next biggest party - the official Opposition - want to be the government as well as opposing the government in the short term . o The Commons is primarily therefore the 'cockpit' of two-party struggle with the votes of backbenchers on the government side ensuring that the government can effectively govern - i.e. pass its proposals into law - with the backbenchers of the major opposition party primarily involved in supporting their leaders in the constant attempt to politically embarrass the government of the day. o Party leaders and their backbenchers are tied by many mutual obligations - shared political opinions underpinned by philosophy, personal friendships, the ambitions of backbenchers to become frontbenchers, but most basically by electoral factors. Backbenchers will benefit in votes at a general election from the success of their leaders and this means that there is a general reluctance to criticise the leadership in public as this decreases the 'credibility, or fitness to govern' factor. ...read more.

It briefs lobby correspondents 'off the record' on a daily basis and plans the PM's media appearances. Because of the central role of the press officer in presenting government policy to the media, recent holders of the job have been close confidantes of the PM. Bernard Ingham, Margaret Thatcher's Thatcher's Press Officer, gained a controversial reputation for pugnacious defences of the Prime Minister and occasional scathing denigrations of ministers. Tony Blair's press secretary, Alistair Campbell has become even more prominent. The Policy Unit provides policy and analysis and advice for the prime minister. Specifically, its main purposes are, Commenting critically upon Departmental proposals; bringing forward new ideas and identifying new areas requiring attention; following up policy proposals. * The Prime Minister as Chairman of the Cabinet - The Prime Minister is Chairman of the Cabinet. He or she decides when the Cabinet meets. Procedure at Cabinet meetings is entirely in the hands of the Prime Minister. The prime minister chairs Cabinet meetings. Prime Ministerial 'styles' of chairmanship have included the clipped and businesslike (Attlee), the dominant but discursive (Churchill), the relaxed yet efficient (Macmillan), the nondirective/consensual (Wilson), the aloof (Heath), the managerial (Callaghan) and the directive non-consensual (Thatcher). * The Prime Minister and the Cabinet Committee System - Because of the sheer volume and complexity of governmental business, the bulk of decisions within the Cabinet system are taken by Cabinet committees. The establishment, composition, terms of reference and chairmanship of Cabinet committees are the responsibility of the prime minister * The Prime Ministers Dominance of some policy areas - Prime Ministers have always been personally involved in diplomacy but in recent decades this involvement has deepened, for example, a revolution in communications allows politicians to travel faster and more frequently, maintaining personal contacts with other leaders. Membership of the EC has made a vast number of domestic policy issues the subject of international action and so brought under the Prime Minister's eye. ...read more.

* Ironically, the more the general programme of the government is associated with the Prime Minister the more he or she becomes the target of opposition and the criticism of the other groups. * Thatcher became personally associated with the poll tax and this contributed greatly to her down fall. * Major was attacked by sections of the Tory press - there was unprecedented hostility of sections of the Conservative press. The contempt of the Murdoch press for John Major's leadership and the partisan support for the Euro-rebels in the Telegraph newspapers was highly damaging * Tony Blair has paid the price of having a high profile press secretary by being satirised by the highly effective Rory Bremmer show, The press - particularly the left-leaning Guardian and Observer have been strong critics of government. The Blair government has certainly not managed to control all its internal publicity nor to maintain policy and personal unity. The imfamous Woman's Institute booing of Blair ended his 'honeymoon' with the public. 8. Conclusion : Does the UK have Presidential Government ? Some broad conclusions have run throughout the debate: Any PM has extensive personal power. This power will wax and wane according to: o The style, skill and personality of a specific PM o The level of success the government experiences o Election results o Media comment o Circumstances beyond the control of the government - wars, natural disasters, economic cycles o Party unity and divisions o The extent of rivals in the party leadership o Personal chemistry o The strength of the political opposition o Sheer good or bad luck A week is a long time in politics, Harold Wilson said. Every PM has periods where their personal power grows and they can - for eg - appoint and sack ministers. At other times PMs are hemmed in by circumstances. The PM who perhaps exercised greatest personal power - Mrs Thatcher - was also the only PM to be rejected by her own party while in good health and without the excuse of a political crisis. 1 ...read more.