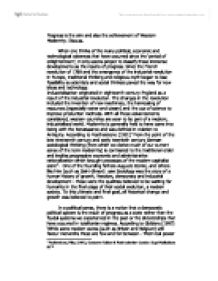 Progress is the aim and also the achievement of Western Modernity. Discuss.

Progress is the aim and also the achievement of Western Modernity. Discuss. When one thinks of the many political, economic and technological advances that have occurred since the 'period of enlightenment', it only seems proper to classify these immense developments as the results of progress. Since the French revolution of 1789 and the emergence of the industrial revolution in Europe, traditional thinking and religious myth began to lose feasibility as scientists and social thinkers paved the way for new ideas and technology. Industrialisation originated in eighteenth century England as a result of the industrial revolution. The changes in the revolution included the invention of new machinery, the harnessing of resources (especially water and steam) and the use of science to improve production methods. With all these advancements considered, western countries are seen to be part of a modern, industrialised world. Modernity is generally held to have come into being with the Renaissance and was defined in relation to Antiquity. According to Featherstone (1991) 'From the point of the late nineteenth century and early twentieth century German sociological thinking (from which we derive much of our current sense of the term modernity) is contrasted to the traditional order and implies progressive economic and administrative rationalization which brought processes of the modern capitalist state'1. One of the founding fathers Auguste Comte, and others like him (such as Saint-Simon) ...read more.

The increasing social complexity generated by industrialism has created complex new problems that traditional bureaucracies could not solve. Moreover, growing secularism undermined the belief systems that made traditional authoritarianism acceptable.4 Although we now have a comprehensive system of communication between fellow westernized countries and is becoming increasingly involved in organisations such as the EU which bind us even closer with other countries, this did not happen without conflict. The twentieth century has been unquestionably the most war-ridden and destructive in human history. Thus, far more than 100 million human beings have being killed, an average of 3500 a day, most of which in the two world wars5. The Cold War was an antagonistic rivalry between the USA and the former Soviet Union that lasted from the 1940 until about 1990. Both sides spent massive sums every year on the development of armaments and on maintaining military personnel. There were many reasons for this rivalry but the Cold war is generally thought of as a struggle of ideologies and the USA saw the 'containment of communism' as very important to keeping the freedom of the people. The USA and the Soviet Union tried to outdo each other in how many weapons they had and how powerful they were and at certain points in history when nuclear war seemed probable such as the Cuban missile crisis of 1961. ...read more.

The exploitation of other people in order for western modernity's progression can be seen as the cost of progress and some what tarnishes the achievements of western modernity. The mass production of cotton drove modern imperialism and destroyed handicraft enterprises, especially in India, with incalculable costs. Modern arms increased the security of some states but they also devastated many others through warfare, revolutions, terrorism and the ubiquitous threat of landmines and other weapons. On the surface level the progress on western modernity is obvious. For the western civilisation, due to great thinkers, increased economic knowledge and dominant political power, western modernity has achieved progress in a technological sense. However, western modernity now seems to need progression not only in a technological way but in the way of political world affairs. Due to the progress that has been made in weaponry and communications (such as cellular phones and the Internet), instead of trying to dominate other countries, western modernity has realised that other countries that are not traditionally regarded as westernised are become more advanced and increasingly modern themselves. This means that they now require the positive aspects of modern society such as improved medication and entertainment but may want the most sinister technology such as weapons of mass destruction. Western modernity must aim to continue technological progress and put devices in place to make sure that the technology that has been developed is used for the good of all. ...read more.