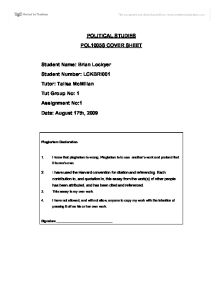 POLITICAL STUDIES POL1005S COVER SHEET Student Name: Brian Lockyer Student Number: LCKBRI001 Tutor: Talisa McMillan Tut Group No: 1 Assignment No:1 Date: August 17th, 2009 Plagiarism Declaration 1. I know that plagiarism is wrong. Plagiarism is to use another's work and pretend that it is one's own. 2. I have used the Harvard convention for citation and referencing. Each contribution to, and quotation in, this essay from the work(s) of other people has been attributed, and has been cited and referenced. 3. This essay is my own work. 4. I have not allowed, and will not allow, anyone to copy my work with the intention of passing it off as his or her own work. Signature ______________________________ The realm of international relations encompasses many political theories which have had varying degrees of influence on shaping the political world that we live in today. However, the two main theories that most influence the study of International Relations are Realism and Idealism, since the formation of both theories there has been a constant debate about the relevance and implementations of both theories which has therefore resulted in much conflict between the advocates of each theory. This essay will attempt to examine and contrast the theories of Realism, Idealism and neo-Realism and show how they differ and relate to each other. ...read more.

Both powers were relentless in their pursuit of seizing and securing power and influence throughout the world. It was the sheer strength and dominance of both the USA and USSR that resulted in a shift in world power and therefore the continual ideological conflict between capitalism and communism which divided the world. However, the post Cold War is very much different and the concept of realism is no longer a dominant theory in International Relations. Realism is an anarchical theory, and it is held that under anarchy, survival of the state cannot be guaranteed (Baylis and Smith, 2001:143). On the other hand the concept of Idealism, presents more of an optimistic view on world politics. Referring to great thinkers like Immanuel Kant and his thoughts on perpetual peace, modern Idealism highlights the necessity for cooperation, rationality, morality and non-state actors in order to bring about the fundamental pre requisites for the onset of peaceful and cooperative international relations (Owen, 2000:34). Idealist theories emphasize the positive impact that economic liberalism has on world politics as the generation of wealth through free trade with less national boundaries stimulates economic growth and promotes harmonious relations. Individual states and organisations such as the United Nations are the main implementers of idealist theories. ...read more.

However, for Neo-realists, power is not merely the accumulation of military resources and the ability to intimidate and coerce other states, it is viewed as the combined capabilities of a state. (Baylis and Smith 2001: 209). Neo-realist ideology highlights the importance of anarchy and its effects on defining the international system as all states are functionally similar units who therefore all suffer the same constraints from an anarchical system and are all striving to maintain their position in the system (Baylis and Smith 2001: 209). To conclude all three theories have been influential in shaping the contemporary political landscape of the modern world. However, it must be noted that Realism, after the fall of the USSR began its downfall. Its ineffectiveness in predicting the end of the war meant that it had not fulfilled its primary function and much of its credibility as a political science was therefore lost. Realism was a theory which majorly influenced international relations where it was still relevant but in the 21st century it is nothing more than archaic. Today states no longer view the international sphere as a struggle for power, but more as a mechanism for opening free markets and creating political unions. Supranational institutions are increasing in number and power as a reflection of this. And as this happens realism loses more and more credibility as a theory of international relations in the 21st century. ...read more.