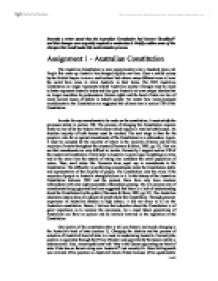 Recently a writer stated that the Australian Constitution had become &quot;fossilised&quot; and that changes were urgently required to modernise it - Briefly outline some of the changes that would assist this modernisation process.

Changing the identity and the process of selection of Australia's head of state is a must in modernising Australia. Currently the position is appointed through the Prime Minister and approved by the Queen which is undemocratic. Also, many republicans' ask: 'why is the Queen appointing our head of state if she has no formal ruling over Australia?' Just recently Dr. Peter Hollingworth was relieved of his position as Australia's head of state because of his questionable background. This clearly demonstrates that appointment of the position through one person is flawed. As a result the current Labor leader Simon Crean has proposed several changes to the constitution in a republican model. The main change he has proposed is that Australia should become a republic with an Australian head of state. Simon Crean has also suggested changes to a preferred referendum model by the majority of Australians, which I strongly oppose as already mentioned. Other amendments by Simon Crean have proposed include fixed four year terms for the house and the senate. Simon Crean believes that fixed terms will require parties seeking election set out clear four year programs for transparency for the public (Crean, 2003, pp 11). ...read more.

Currently, the judicial system is responsible for human rights agendas. This is due to the inheritance of the legal system from England during Australia's settlement. The result is a greater emphasis on common law as the means to which rights are protected in Australia unlike the United States of America and the Bill of Rights (Rosenberg & Williams, 1998, pp447). Other areas of human rights amendments should also extend to is immigration of boat people. In recent events the Liberal party have failed to effectively handle the issue of illegal immigrants coming to Australia. Written amendments should address problems of treatment and processing of the people. Ultimately, in the end amendments are only successful if it has the full support of the nation. As already mention, awareness of the Constitution is lacking in today's society and greater education is required. Australians must be vociferous in their opinions and ideas of a modern Australia. The government must open their ears to the pleas of its people. The nation must rise to its two own feets no longer binding to the British Empire. The head of state should be appointed by its own people democratically. Australians must engrave into its Constitution its best attribute: multiculturalism. ...read more.