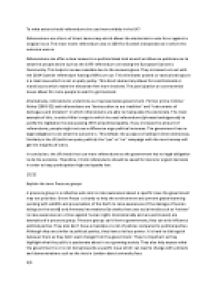 Referendums and Pressure Groups in the UK.

﻿To what extent should referendums be used more widely in the UK? Referendums are a form of direct democracy which allows the electorate to vote for or against a singular issue. The most recent referendum was in 2014 for Scottish independence in which the outcome was no. Referendums can offer a clear answer to a political dead lock as well as influence politicians as to what the people desire such as the 1975 referendum on leaving the European Economic Community. This helps to renew mandate due to the answers given. They increase turn out with the 2014 Scottish referendum having a 90% turn out. ...read more.

The main example of this, is under Hitler?s reign to which he used referendums (phrased ambiguously) to justify the legislation he was passing. With all political apathy, if you increase the amount of referendums, people might not see a difference ergo political increases. The government has no legal obligation to do what the outcome is. This defeats the purpose of calling it direct democracy. Similarly in the US (with two party politics) the ?yes? or ?no? campaign with the most money will get the majority of votes. In conclusion, the UK should not use more referendums as the government has no legal obligation to do the outcome. ...read more.

and Amnesty International (a charity that uses social media such as ?twitter? to raise awareness on crimes against human rights internationally and are well known) are examples of a pressure group. Pressure groups can?t form a government; they can only influence political parties. They also don?t have a mandate or a lot of policies compared to political parties. Although they are similar to political parties, they have a lot less power. It is hard to distinguish between them as they both want change from the government. They?re important as they highlight what the public is passionate about in our growing society. They also help expose what the government is or is not doing towards a specific issue which can lead to change with protests and demonstrations such as the riots in London about university fees. 5/5 ...read more.