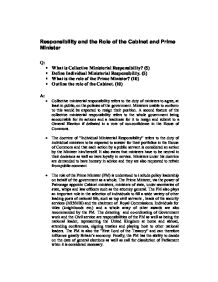 Responsibility and the Role of the Cabinet and Prime Minister

Responsibility and the Role of the Cabinet and Prime Minister Q: * What is Collective Ministerial Responsibility? (5) * Define Individual Ministerial Responsibility. (5) * What is the role of the Prime Minister? (10) * Outline the role of the Cabinet. (10) A: * Collective ministerial responsibility refers to the duty of ministers to agree, at least in public, on the policies of the government. Ministers unable to conform to this would be expected to resign their position. A second feature of the collective ministerial responsibility refers to the whole government being accountable for its actions and a readiness for it to resign and submit to a General Election if defeated in a vote of non-confidence in the House of Commons. ...read more.

Ministers under his doctrine are demanded to have honesty in advice and they are also requested to refrain from public comment * The role of the Prime Minister (PM) is understood to include policy leadership on behalf of the government as a whole. The Prime Minister, via the power of Patronage appoints Cabinet ministers, ministers of state, under-secretaries of state, whips and law officers such as the attorney general. The PM also plays an important role in the selection of individuals to fill a wide variety of other leading posts of national life, such as top civil servants , heads of the security services (MI5/MI6) ...read more.

* The Cabinet in the modern UK system is comprised of approximately 20-22 ministers. Cabinet ministers have weekly meetings at which they discuss the approval of decisions made elsewhere (usually committees) as well as legitimise decisions made by other bodies. Cabinet ministers have to follow the doctrine of "Collective Ministerial Responsibility" and therefore give the impression of collective decision-making. The Cabinet also serves as a final resort - the highest "Court Of Appeal" for inter-departmental disagreements and it is there that the day to day matters as well as critical issues (E.g. Hyper- Inflation, war, etc.) are dealt with. Finally, the Cabinet has the power to delay policies from becoming thus allowing more time for thought on policy proposals. Andy Aroditis. ...read more.