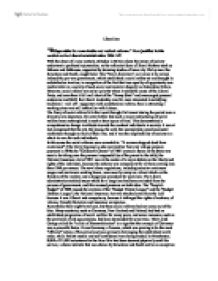 &quot;Responsible for remarkable and radical reforms.&quot; How justified is this verdict on the Liberal administration 1906-14?

Liberalism "Responsible for remarkable and radical reforms." How justified is this verdict on the Liberal administration 1906-14? With the dawn of a new century, attitudes in Britain about the nature of society underwent a profound rejuvenation, as the reformist ideas of liberal thinkers such as Hobson and Hobhouse, supported by damning studies of inner city life by men like Rowntree and Booth, caught hold. This "New Liberalism", as it came to be called, imbued the pre-war government, which established a social safety net and brought in redistributive taxation, in recognition of the fact that true equality of opportunity was inachievable in a society of such social and material disparity as Edwardian Britain. However, social reform was only a priority when it suited the cause of the Liberal Party, and even then it fell well short of the "Nanny State" and encouraged personal endeavour and thrift. the Liberal leadership was far more interested in satisfying traditional - well off - supporters with constitutional reform, than in attracting a working class vote still unfamiliar with Labour. The flurry of social reform bills that went through Parliament during the period were a dramatic new departure, for never before had such a major restructuring of social welfare been contemplated in such a short space of time. This demonstrated a comprehensive change in attitude towards the weakest individuals in society: it was at last recognised that the old, the young, the sick, the unemployed, could encounter misfortune through no fault of their own, and it was the responsibility of society as a whole to care for such individuals. In this sense the social reforms were remarkable: "A woman dropped dead from excitement" (The Daily Express) as she received her first ever old age pension payment in 1909; the "Children's Charter" of 1907 created a furore as the State was seen to be taking over the personal responsibility of the parent to the child; the National Insurance Act of 1911 was at the centre of a major debate on ...read more.

Thus the Labour Party could be essentially characterised as a bureaucratic trade unions' party, where loyalty to the movement replaced socialist ideology: "this was a trade union code of behaviour; so were the political aims of the Labour Party essentially trade-union ones." The most significant point about class-based explanations of the rise of Labour is the implicit suggestion that the late nineteenth and early twentieth centuries represented a period of fundamental discontinuity within British politics, when class replaced older allegiances such as religion, ethnicity, or deferential loyalties as the basis for political alignment. Recent work has posed a challenge to this interpretation, attempting instead to explain popular politics in terms of a sustained continuity in popular Radicalism which may be traced through the Chartist movements of the 1830s and 1840s, and the popular support for Gladstonian Liberalism, into the early twentieth century and the rise of the Labour Party. Of central importance to understanding political formations, it is argued, is the ideological content of popular politics. The formative influences on this thesis are thus acknowledged as the work of Peter Clarke and Gareth Stedman Jones in stressing the importance of reconstructing and reasserting the intellectual roots of popular politics." This work is valuable, and much of it is persuasive. The adapted quote used by Biagini and Reid to summarise their thesis - "those who were originally called Chartists were afterwards called Liberal and Labour activists" - cannot easily be disputed, even if it may only be explained in generational terms. The Labour Party was not fashioned upon an entirely clean sheet. Many of its early activists did indeed express views which may be placed within the Radical political tradition, and many of them indeed supported or were active in the Liberal Party; some of the oldest could no doubt draw on memories of Chartism. Indeed, perhaps the most useful aspect of this new work has been the reassessment of the radical undercurrents informing the politics of the period 1850-1880, hitherto explained largely as a difficult hiatus within the history of class struggle, or rather inadequately in terms of a theory of labour aristocracy." ...read more.

The Liberal is less universal in his proposals. He does not object to the municipalization, or even nationalization, of mechanical monopolies, of industries which in fact do not admit of competition. Such industries as the supply of water, gas, and electricity, tramways and railways are not in fact competitive, and efficiency is probably as well maintained by aggrieved payers of rates and taxes as by shareholders disappointed of their profits. But the Liberal is not disposed to admit that similar conditions would produce similar results in industries of a more speculative or hazardous character. Nor can he admit that private ownership of capital necessarily involves the exploitation of labor. In certain industries, notably the cotton industry of Lancashire, he sees examples of the successful combination of individual enterprise in management with minimum standards of life and wages fixed either by the factory acts or by powerful trade unions, and he is not satisfied that the enterprise could be as brilliant or the minimum standards as high if the capital engaged were state-owned. In particular, the Liberal distrusts the bureaucratic system of management which socialism involves . . . Social reform requires the appointment of many officials. But the functions of such as have already been appointed are confined to inspection, to advice, and to the collection of money or information. We have had no experience of officials engaged in the manufacture of goods for export or in the conduct of the shipping trade. Such experience as we have had of municipal enterprise has only satisfied us of the capacity of officials who are controlled and criticized by unofficial ratepayers who have a personal and pecuniary interest in the efficiency of the official. No Liberal government has yet proposed to extend official management to those many fields where success depends upon the judicious calculation of risks. Until that proposal is made there will always be a gulf between Liberals and Socialists and a distinction between the policy which limits the destructiveness of competition for private gain and that which abolishes such competition altogether ...read more.