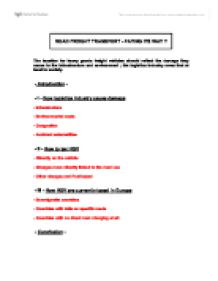 ROAD FREIGHT TRANSPORT - PAYING ITS WAY ? The taxation for heavy goods freight vehicles should reflect the damage they cause to the infrastructure and environment ; the logistics industry owes that at least to society. - Introduction - - I - How logistics industry cause damage - Infrastructure - Environmental costs - Congestion - Accident externalities - II - How to tax HGV - Directly on the vehicle - Charges more directly linked to the road use - Other charges and Fuel based - III - How HGV are currently taxed in Europe - Eurovignette countries - Countries with tolls on specific roads - Countries with no direct road charging at all - Conclusion - ROAD FREIGHT TRANSPORT - PAYING ITS WAY ? - Introduction - According to a British government report (BBC News 2000), one Heavy Good Vehicle (HGV) is estimated to generate �25,000 per year in taxes, but the problem is that the same vehicle can do �28,000 of damage every year. Indeed, in its current consultation paper on Modernising the Taxation of the Haulage Industry(*), the British Government states as one of its objectives that road users should contribute towards the true costs that they impose on society (CfTI 2001). Many specialists argue that a lorry causes much more damage than lighter vehicles, some claim that a HGV causes as many damage as 30 000 private cars, and other that a 40-tonne freight vehicle causes 60,000 times more damage to the roadway than a car (GFTM 2002). In any case, current HGV taxation does not take in account the real damages caused by this type of vehicle. This is the case in Britain but as well in all European Union countries. The best way to tax as efficiently as possible, is not yet known, because it is really difficult to determinate the real cost of HGV damages. If infrastructure damages are easily calculable, those which concern environment are very hard to estimate, because they are very variable depending on weather, congestion and peak-hour, the current vehicle condition, its motor type, its journey time, and so on. ...read more.

According to the CfTI "whatever the levels of traffic [in EU], (...) congestion charging can bring real benefits in terms of better use of the system, less congestion and greater network reliability". - Accident and others externalities Accident externalities arise when extra vehicles on the road increase the probability that the other road users will be involved in an accident. Accident probability depends to a large extend on distance, driving time and particularly the other traffic (DfT 2003). The costs of accidents are not covered by insurance and consequently, are borne by social security or society. Cost of accidents run into tens of billions � and an incalculable human cost, 40 000 people killed each year and 1.7 million seriously injured in the European Union (OJEC 1999). Other environmental externalities exist (e.g. vibrations, water and soil pollution by water runoff, severance effects, damages to natural ecosystems, visual impacts etc.). Some studies conclude anyway, that the corresponding external costs are lower than those generated by air pollution and noise (Ricci & Rainer 1999). II - How to tax HGV As seen in the previous part, road users should pay prices that reflect the costs they impose (Ricci & Rainer 1999). For efficient taxation, these costs would include the damages done during their journey, such as congestion, noise and pollution (CfTI 2001). Thus, charges may vary, as well, by distance, location, time of day, vehicle type. The methods used to estimate external costs due to HGV, must be able to address all these different scales in the tax level. At present, EU countries vary in the types and levels of taxes imposed on lorries. Ten countries in EU, have registration tax and all countries have annual road tax (EDIE 2002).The problem is about how to tax HGV, on the road use, through tolls, annual tax, or nothing, none EU countries is yet agree. Moreover, the question of transport taxation is intricately linked to the principles of transport pricing (TRCF 2000). ...read more.

- Countries with no direct road charging at all In UK, while there are only few user charge, a charge is hoped to be introduced in 2006, its objectives are that all road users should pay at levels which reflect the costs they impose, namely, climate change, local air quality, road maintenance, safety, traffic congestion and noise. The British Government plans to reduce fuel duty when the charge will be introduced, to keep the same tax level burden. This charge will be applied on domestic and foreign lorries over 3.5 tonnes, and on all UK roads with the potential of a different rate for motorways. This charge mayl vary by lorry type (emission, weight), and according to time of day (ITS 2003). - Conclusion - To conclude, even if there are much car on the road than HGV, lorries damage the infrastructure, the enviroment much more and contribute to increase congestion. However, current taxes are not revelant for the true cost HGV impose. Indeed, the EU push its members to take in account real external costs in the tax calculating. While most members are agree to apply tax according to the type of vehicle, distance, time of day and location, they are disagree on the way HGV must pay, either by tolls or by direct taxes on the vehicle and on the fuel. Anyway, logistic industry should appreciate that according to the EU, a tax standardisation will permit national taxes to be reduced. Toll roads seems, in many ways, a good solution to the problem of charging for road use. Users pay right at the time of use, making the connection between travel and cost very clear. It is easy to charge different rates for different kinds of vehicles and time-of-day rates can be adopted to discourage peak-hour traffic. Until now, for all these reasons toll charges should reflect as fair as possible the damage caused by HGV, and even the UK will implement this system since 2006. ...read more.