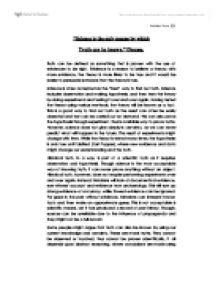 &quot;Science is the only means by which Truth can be known.&quot; Discuss.

“Science is the only means by which

Truth can be known.” Discuss.

Truth can be defined as something that is proven with the use of evidences to be right. Evidence is a reason to believe a theory; with more evidence, the theory is more likely to be true and it would be easier to persuade someone that the theory is true.

Science is often accepted as the “best” way to find out truth. Science includes observation and making hypothesis, and then tests the theory by doing experiments and testing it over and over again. Having tested the theory using various methods, the theory will be known as a fact. This is a good way to find out truth as the result can often be easily observed and test can be carried out on demand. We can also prove the hypothesis through experiment, thus is a reliable way to prove truths. However, science does not give absolute certainty, as we can never predict what will happen in the future. The result of experiments might change with time. While the theory is tested many times, the hypothesis is only true until falsified (Karl Popper), where new evidence and data might change our understanding and the truth.

Historical truth, in a way, is part of a scientific truth as it requires observation and hypothesis. Though science is the most acceptable way of knowing truth, it can never prove anything without an object. Historical truth, however, does not require performing experiments over and over again. Instead, historians will look at documentical evidence, eye witness’ account and evidence from archaeology. This will sum up strong evidence of accuracy, while flawed evidence can be ignored. For gaps in the past without evidence, historians can interpret known facts and then make an approximate guess. This is not acceptable is scientific means, yet it has produced a record of past history. Though, sources can be unreliable due to the influence of propaganda and they might not be a full record.

Some people might argue that truth can also be known by using our current knowledge and certainty. These are moral truths. They cannot be observed or touched, thus cannot be proven scientifically. It all depends upon abstract reasoning, where conclusions are made using logic. It does not rely on observable evidence that might be lost or misinterpreted, but follows good reasons that is proven true to make conclusion. This, however, is not full proof as not every person will agree with the premises.

We can also argue that truth can be known from sacred writings (e.g. Bible and Qur’an) and personal experience. This is spiritual truth which cannot be proved empirically but is a belief accepted on faith. No proof is possible for this, yet it can answer many important things about lives and humans.

To conclude, science can indeed provides us proof to most truths, however, it is not the only way to reveal truth. Science is just a way to prove hypothesis using experiments. These experiments are yet unreliable as the theory might change when new thinking comes in. Therefore, science cannot provide us absolute truth. We can find evidences in history and sum them up to form historical truth. We can use logic to form abstract reasoning, which is moral truth. We can also quote sacred writings, and genuinely belief in God, spiritual truth is proven. There are various truths, and there are many ways to find out about them.