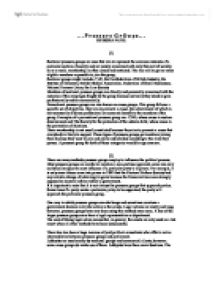 Sectional pressure groups are ones that aim to represent the common interests of a particular section of society and are mostly concerned with only that part of society; so as a result, membership is often closed and restricted.

. . . P r e s s u r e G r O u p s . . . HITIKSHA PATEL (1) Sectional pressure groups are ones that aim to represent the common interests of a particular section of society and are mostly concerned with only that part of society; so as a result, membership is often closed and restricted. The also aim to get as many eligible members as possible to join the group. Sectional groups might include; TUC, the Confederation of British Industry, the Institute of Directors, British Medical Association, Federation of Small Businesses, National Farmers Union, the Law Society Members of sectional pressure groups are directly and personally concerned with the outcome of the campaigns fought by the group because normally they stand to gain professionally and/or economically. Promotional pressure groups are also known as cause groups. This group follows a specific set of objectives- they aim to promote a cause, the achievement of which is not necessarily of direct professional or economic benefit to the members of the group. Examples of a promotional pressure group are- CND, whose cause is nuclear disarmament and The Society for the protection of the unborn child, whose cause is the prevention of abortions. There membership is not usually restricted because they aim to promote a cause that everybody is likely to support. These types of pressure groups get members joining them because they want to join and can be sub-divided according to the aims they pursue. ...read more.

Others are designed to inform people about developments or ask them to take action. An example of this would be Greenpeace, who have managed persuade almost half a million people to write letters protesting about whaling. On the other hand, some groups are not viewed in a sympathetic light by the media and therefore cannot expect to receive good publicity as a matter of course. Sometimes different issues are given higher priorities, and therefore other groups may find that there press releases are ignored. As a result, some pressure groups may organise events, to gain publicity. These events may vary, from things like, marches or demonstrations or they might be other forms of direct action. In some circumstances, certain pressure groups may end up using violence as a means of publicising their cause. Pressure groups could also use direct action. Direct action is a form of political action which operates outside the formal political process. It can be characterized as a range of activities which have a number of essential qualities. They can be highly organised and effective, they are demonstrative, obstructive, publicity seeking, increasingly illegal and at times violent. Campaigns of direct action are highly organised. Even though local campaigns of direct action might not be successful, they can still influence government policy. (3) Some pressure groups are more successful than others. There are many reasons behind this. It is not simple to measure the success of a pressure group. Although there are some cause groups which have a single objective, most pressure groups have multiple objectives and it is difficult to know which has priority. ...read more.

A group's organisational structure also has a hearing on its effectiveness. Sectional groups tend to have a centralised structure including a council which is the ultimate policy-making body and smaller specialised groups which look after individual areas or campaigns. Cause groups on the other hand tend to have a more decentralised structure. The advantage here is that members feel that they are intimately involved in the group's decision making process. Every pressure group has finite resources, but the way in which a group chooses to use these resources will help to determine that group's effectiveness, a bad choice of tactics can mean a long-term setback. Public opinion can also be an important factor in determining a group's effectiveness. Attitudes tend to change slowly, but a series of events or a crisis may lead to the expression of new views. Often these new views are first expressed in the media. Decision makers tend to be concerned with what the media sees as important and to give priority to these issues. That is one reason why pressure groups cultivate contacts with the media. The importance of public opinion can be seen in the way in which the environmental movement grew in the 1980's.Much media coverage was given to environmental problems such as the reduction of the ozone layer, global warming and acid rain. Public concern about environmental issues led not only to an increase in support for environmental groups, it also led to greater emphasis being placed on the environment by decision bakers. Members rose form 74,360 in 1988 to 231,211 in 1991. ...read more.