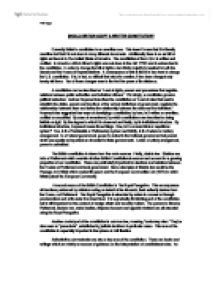 SHOULD BRITAIN ADOPT A WRITTEN CONSTITUTION?

SHOULD BRITAIN ADOPT A WRITTEN CONSTITUTION? Currently Britain's constitution is an unwritten one. This doesn't mean that it is literally unwritten but that it is set down in many different documents. Additionally there is no set bill of rights as there is in The United States of America. The constitution of the U.S.A. is written and codified. In America a bill of citizen's rights was set down in the mid 1770's and is entrenched in the constitution. In order to change the bill of rights a two thirds majority is required in both the Senate and the House of Representatives. A consequence of this is that it is very hard to change the U.S. constitution. It is, in fact, so difficult that since its creation, it has been changed only twenty six times. Ten of these changes were in the first five years of its existence. A constitution can be described as "a set of rights, powers and procedures that regulate relations between public authorities and individual citizens." Put simply, a constitution governs political behaviour. Andrew Heywood describes the constitution as "a set of rules that seek to establish the duties, powers and functions of the various institutions of government, regulate the relationships between them and define the relationship between the state and the individual." ...read more.

This area of the constitution is especially important in the sphere of civil liberties. Authoritative commentaries are also a key area of the constitution. These are books and writings which are widely as sources of guidance on the interpretation of constitutional rules. An example of such an authoritative commentary would be T. Erskine May's "Treatise on the laws, priveliges, proceedings and usage of Parliament," the classic guide to Parlimentary procedures and rights, used by the Speaker of The House of Commons. Finally, conventions are established customs and practice which are considered binding but lack the force of law. These apply particularly to the practices of the Crown and the Cabinet. It is convention that; the Speaker of The House must be impartial, the Cabinet is collectively responsible and that the Prime Minster be a member of the Commons. These five sources are overridden, however, by E.U. law which has precedence over U.K. law, when the two conflict. Under E.U. law, the U.K. courts are required to strike down laws which contravene E.U. law. E.U. law took this precedence in1972 when Britain signed The Treaty of Rome. One significant and well known example of E.U. law taking precedence over U.K. ...read more.

and a strong government based on strong party activism. They believe the party should mandate the government in a "bottom up" approach, at odds with the Tories' "top-down" approach. Socialists believe that a bill of rights and electoral reform would grant too much power to judges and the E.U. and that it would constrain Socialism. Liberals follow a similar train of thought to Socialists but are, however, more open to reform. They would favour a new written constitution and place an emphasis on the centrality of the individual. As such, the Liberals would like to see devolution on a greater scale along with electoral reform, proportional representation greatly increasing the number of Liberal seats in parliament. Liberals ultimately believe that the current "rules of the game" are too partisan and there is too little, if any consensual decision making. Ultimately, I believe that in order for there to be a significant change to the British constitution, in terms of changing its format, a referendum would be necessary. Our current constitution and system does, however seem adequate and serves its purpose. Here the old adage "if it ain't broke, don't fix it" seems to apply neatly. America's Constitution seems outdated when one considers that it has been changed only sixteen times in the last two hundred and fourteen years. Overall, flexibility appears to be an attractive quality. ?? ?? ?? ?? Will Topps ...read more.