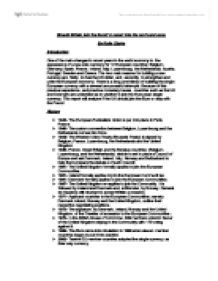 Should Britain join the Euro? A report into the pro's and cons.

Should Britain join the Euro? A report into the pro's and cons By Katie Clarke Introduction One of the main changes in recent years in the world economy is the appearance of a new sole currency for 12 European countries: Belgium, Germany, Spain, France, Ireland, Italy, Luxembourg, the Netherlands, Austria, Portugal, Sweden and Greece. The two main reasons for building a new currency are, firstly, to rival the US dollar, and, secondly, to strengthen and unite the European economy. There is a long pre-history of building the single European currency with a several unsuccessful attempts. Because of this previous experience, and previous monetary losses, countries such as the UK and Denmark are undecided as to whether to join the European single currency. This report will analyse if the UK should join the Euro or stay with the Pound. History > 1946- The European Federalists Union is put into place in Paris, France. > 1948- The custom convention between Belgium, Luxembourg and the Netherlands comes into force. > 1949- The Western Union Treaty (Brussels Treaty) is signed by Belgium, France, Luxembourg, the Netherlands and the United Kingdom. > 1949- France, Great Britain and the Benelux countries (Belgium, Luxembourg, and the Netherlands) ...read more.

Tourism brings much capital into the UK and governments are always keen to expand any programme that will encourage tourism. As a result of the UK joining the Euro there would be a vastly reduced transaction cost for traders, with savings estimated at around �2 billion annually. These savings come from not having to pay commission or maintain hedge funds to guard against currency instability. At present the British sterling is very strong against other currencies and this greatly affects their imports and exports. Joining the Euro would result in exchange rate stability for over half of UK trade. This would encourage higher levels of trade, as exporters and importers realised that their profit margin could no longer disappear with an unanticipated exchange rate movement. We must take into consideration that we have a major trade deficit with the EU, and that imports as well as exports will experience this new exchange rate stability. However, despite a lot of our trade being with members of the EU, we must not disregard the other 47% our trade. The Euro itself has been unstable against other currencies. An appreciation of the Euro against the dollar subsequent to our joining would mean that the UK's important trade with the USA would be at a disadvantage. ...read more.

This means that it will be much easier to get away with forgery, mainly because the Euro notes come in great variety and are not even all on the same paper. Detecting forgeries could be greatly complicated. At 500 Euros the largest note there is a high chance that criminals see this as a particularly attractive opportunity. Conclusions It is important to value and treasure our heritage, as that cannot be replaced. However, whether this should stand in the way of such a big issue I really doubt. I believe our culture to be strong enough to retain a real identity without the pound. Britain has much strength, economically and culturally, that should enable her to grow and become more prosperous. But this would undoubtedly be made easier by membership in a successful Euro zone. However, whether or not this is attainable is really the issue - can the differences between the members' economies be overcome? Is convergence possible? Will the Euro be successful? I would tentatively suggest that the answer to these questions is, in the long term, yes. On this basis I suggest that it is best for Britain to join soon. There is a real risk of failure and there will undoubtedly be problems in the short to medium term, but I feel it is worth the risk. http://www.theeurodebate.co.uk/ http://www.motorola.com/content/0,,335-648,00.html ...read more.