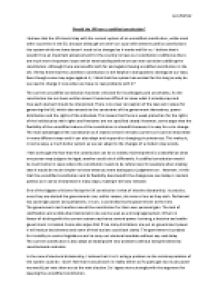 Should the UK have a codified constitution?

﻿Lucy Barlow Should the UK have a codified constitution? I believe that the UK should stay with the current system of an uncodified constitution, unlike most other countries in the EU, because although we aren?t on a par with western politics constitutions the system which we have doesn?t need to be changed as it works well for us. I believe that it wouldn?t be an important advancement for the country to have our constitution codified as there are much more important issues which need tackling before we can even consider codifying the constitution. Although there are benefits both for and against having a codified constitution in the UK, I firmly think that the unwritten constitution is still helpful in being able to distinguish our laws. Even though some may argue against it, I think that the system has worked for this long so why do we need to change it now when we have no real problems with it? ...read more.

One of the biggest criticisms facing the UK constitution is that of elective dictatorship. In practice, once they are elected the governments can, within reason, do more or less as they wish. Parliament has sovereign power and parliament, in turn, is controlled by the government at the time. The government can therefore mould the constitution for their own personal gain. The lack of codification and undisturbed democratic rule can be seen as a strong legal system. Others in favour of sticking with the current system say that as central power is strong, a decisive and stable government is created. Some also argue that if too many limitations are put on government power it will reduce decisiveness and some of their actions could lack clarity. The government is praised for its ability to control legislature and to carry out electoral mandate without any real delay. The current constitution is also adept at dealing with new problems without being hindered by constitutional restraints. ...read more.

Other reasons which are attributed to not having a written constitution in the UK include rigidity, where higher law is more difficult to change than statute law meaning that the codified constitution would soon become outdated, and political bias, where once set of rules are seen as more important than the others. Changing the constitution is also seen by many as unnecessary as improving democracy and strengthening balances would be a better way of regulating the government, than a constitutional reform. In conclusion, I think that the arguments against a reform to the UK constitution out way the reasons for a reform. There really is no need to change the system as the sense of ?British fair play? which it is based on, has worked well for us up to now so there is no real reason why we need to have a set of written rules and guidelines. There are also a lot more pressing matters which require attention, such as the economic crisis, so the codification of the constitution can wait until we had sorted out the financial troubles facing the country. ...read more.