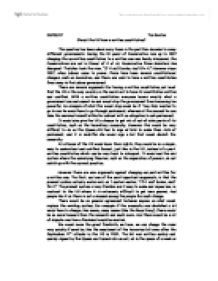 Should the UK have a written constitution?

All citizens of the UK would know their rights, they would be in a simple, easy to understand and codified format, just like in the US, instead of a part-written constitution which can be very hard to interpret. It would end the odd system where the underlying theories, such as the separation of powers, do not match up with the current practice. However there are also arguments against changing our part-written for a written one. The first, and one of the most important arguments, is that the present system actually works well, as I quoted earlier, "If it ain't broke, don't fix it." The present system is very flexible and it easy to make and repeal law, in contrast to the US where it is extremely difficult to get laws passed. ...read more.

The bill was written quickly and quickly signed by the Queen and turned into an act, all in the space of a week or so. In contrast other countries have a great deal of problems in changing their written constitution when need be. Overall I think the UK should stick with what we have at the moment, a part-written constitution. It offers a great deal of flexibility, it works and there would be very little agreement on how a new system would work and what would replace all the institutions that bear a royal title and who's rules and history revolve around the monarchy if it were abolished. Our current system also makes us unique in the world. ...read more.