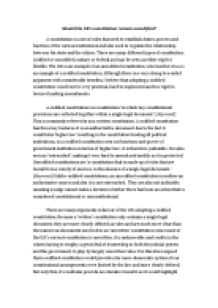 Should the UKs constitution remain uncodified?

Not only this, it would also provide an educative benefit, as it would highlight both the central values and the overall goals of the political system. A second argument supporting codification is that it would cut the government down to size and limit their increasing power. A codified constitution would effectively end the principle of parliamentary sovereignty and it would provide a counter-balance to the power of the executive. At present, through the royal prerogative the PM wields an enormous power, such as the power to declare war, and adopting a codified constitution would provide a safeguard to protect the constitution from interference by the government by the day. The strongest argument in favour of a codified constitution is that it would protect our rights. Individual liberty would be more securely protected by a codified constitution and it would define a clearer relationship between the state and the citizens. Rights would therefore be more transparent, and they would be easier to enforce. An uncodified constitution also increases the chance of elective dictatorship, which further restricts rights. Despite steps in the right directions a result of the introduction of the European Convention on Human Rights, through the Human Rights Act of ...read more.