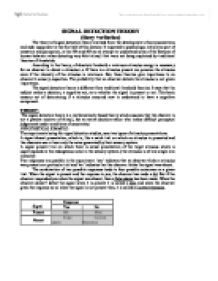 SIGNAL DETECTION THEORY (thery +criterion) The theory of signal detection theory evolved from the development of communications and radar equipment in the first half of this century. It migrated to psychology, initially as part of sensation and perception, in the 50's and 60's as an attempt to understand some of the features of human behavior when detecting very faint stimuli that were not being explained by traditional theories of thresholds. According to the theory, of absolute threshold a minimum stimulus energy is necessary for an observer to detect a stimulus.i.e. If there is a stimulus present we perceive the stimulus even if the intensity of the stimulus is minimum. But, these theories give importance to an observer's sensory capacities. The probability that an observer detects the stimulus is not given importance. The signal detection theory is different from traditional threshold theories. It says that the subject makes a decision, a cognitive act, as to whether the signal is present or not. This basic sensory act of determining if a stimulus occurred now is understood to have a cognitive component. THEORY: The signal detection theory is a mathematically based theory which assumes that the observer is not a passive receiver of stimuli, but an active decision-maker who makes difficult perceptual judgements under conditions of uncertainty. HYPOTHETICAL EXAMPLE: The experimental setup for signal detection studies, uses two types of stimulus presentations: A signal absent presentation, which is, like a catch ...read more.

The difference between the two subjects is that each has a different response criterion.(RC) Subject A's RC is low (as she will say yes if there is the slightest chance there is a tone present) whereas subject B's RC is high (she says yes only when she is sure that she heard the tone) This experiment shows that factors other than the subject's sensitivity to the signal may influence the results of a psychophysical experiment.(in this case subject A's willingness to say yes). This is the basis for signal detection theory, which says that there is a cognitive component to the subject's responses while detecting a signal. THEORETICAL BASIS There are two basic theoretical explanations, for signal detection: 1. The percentage of hits and false alarms depends on the subject's criterion. 2. A subject's sensitivity to a stimulus is indicated by the shape of the subject's ROC curve. CONCEPTS IN SIGNAL DETECTION THEORY There are two main concepts of signal detection theory: Signal and noise The signal is the stimulus presented to the subject. In the above eg. the signal was the tone. The noise is all other stimuli in the environment, and since the signal is usually faint, noise can sometimes be mistaken for the signal. Eg: In the experiment mentioned above, hearing a tone on a trial in which no tone was presented is an example of auditory noise. ...read more.