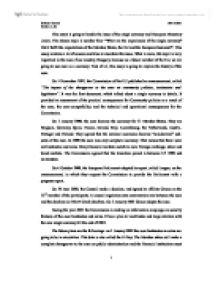 Single currency and European Monetary Union. The chosen topic is number four: &quot;What are the experiences of the single currency? Did it fulfil the expectations of the Member States, the EU and the European business?&quot;.

This essay is going to handle the issue of the single currency and European Monetary Union. The chosen topic is number four: "What are the experiences of the single currency? Did it fulfil the expectations of the Member States, the EU and the European business?". This essay contains a lot of sources and tries to elucidate this issue. What is more, this topic is very important in the case of our country, Hungary, because as a future member of the EU, we are going to use euro as a currency. First of all, this essay is going to explain the history of the euro. On 5 November 1997, the Commission of the EU published an announcement, called "The impact of the changeover to the euro on community policies, institutions and legislation". It was the first document, which talked about a single currency in details. It provided an assessment of the practical consequences for Community policies as a result of the euro, the euro-compatibility, and the technical and operational consequences for the Commission. On 1 January 1999, the euro became the currency for 11 Member States, They are Belgium, Germany, Spain, France, Ireland, Italy, Luxembourg, the Netherlands, Austria, Portugal and Finland. ...read more.

It means that during the run-up to the launch of euro, many prices will be displayed in both national currency units and euros in shops, on bank statements and, by many companies, on wages and salary slips. In all member states except Austria, this is a voluntary process without any legal obligations. (http://europ.eu.int/en/opnews/198/r355.htm) It is timely to talk about the European Central Bank. Formally it was constituted on 1 June 1998. The ECB is part of the European System of Central Banks together with the European Union's 15 national central banks. Its primary objective is to maintain the price stability. Its basic tasks are: defining and implementing monetary policy for the euro area, conducting foreign exchange operations and holding and managing the official foreign reserves of the Member States. On 15 April 1998, the Commission recommended a standard of good practice on banking charges for conversion to the new single currency. Its basic principle is that compulsory aspects of the changeover should be free for consumers. Recommendations cover conversion of accounts, incoming and outgoing payments, exchange of the bank notes and coins. ...read more.

Private debt issuers are not obliged to redenominate their bonds before 1 January 2002 but when they do they are encouraged to follow the method of their national governments. As far as shares and equities are concerned, stock exchanges began trading in euros on 1 January 1999, but companies to not have to alter their share capital before 1 January 2002. As a conclusion it can be asserted, that the single currency has a lot of advantages. It is clear that it is a big change, and as a change it has a lot of risk. But the Member States made a lot of good progresses to make it easier. I hope that when Hungary is going to join the EU, we will not have problems to use the euro as a single currency. I think this is imminent to use national currencies in the case of the European Union. The euro is going to be competitive with other currencies, such as the American dollar and the Japanese yen. It is hard to harden for the new values, but it will take only short time to use the euro without counting problems. The euro hang on a lot of opportunities in the future... ...read more.