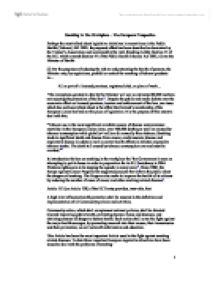 Smoking In The Workplace - The European Prospective

Smoking In The Workplace - The European Prospective Perhaps the most talked about legislative initiatives in recent times is the Public Health (Tobacco) Bill 2003. Its proposed effect has been described as draconian by the Vintner's Association and welcomed by the Anti-Smoking Lobby. Section 15 of the Bill, which amends Section 47 of the Public Health Tobacco Act 2002, allows the Minister of Health: (1) For the purposes of reducing the risk to and protecting the health of persons, the Minister may, by regulations, prohibit or restrict the smoking of tobacco products in- All or part of a licensed premises, registered club, or place of work... 'The exemptions granted to date by the Minister will see an estimated 80,000 workers not enjoying the protection of the ban'1. Despite the public and media debate over the economic effect on licensed premises, tourism and enforcement of the ban, one issue which has not been talked about is the effect that Ireland's membership of the European Union has had on this piece of legislation. It is the purpose of this essay to deal with this. "Tobacco use is the most significant avoidable source of disease and premature mortality. In the European Union alone, over 500,000 deaths per year are caused by tobacco consumption while globally 4 million die annually from tobacco. Smoking leads to significant death and disease from cancer, cardiovascular disease and respiratory disease in adults as well as severe health effects in children exposed to tobacco smoke. The death toll caused by tobacco consumption can and must be avoided."2 In introduction the ban on smoking in the workplace the 'the Government is seen as attempting to put its house in order in preparation for its EU Presidency in 2004. Workers rights seem to be topping the agenda in many areas'3. ...read more.

the deal with a problem that causes 500,000 deaths in the European Union per annum and is within the stated aims of one of the European Union Treaty Articles (Article 137EC) should be welcomed. However, the opposition, mainly by the Vintner's Association has been large. In spite of evidence to the contrary - 'According to figures from the University College London, non-smoking bar-workers take in up to ten times as much Environmental Tobacco Smoke ('ETS') as non-smokers in other professions. This puts them at a risk some 20-30% higher of suffering form "smoking associated" illnesses such as lung cancer. Mandate has put forwards evidence suggesting that the smoking ban will save the lives of 150 Irish bar staff annually'5 - the Vintner's Association argue that the resulting legislation will result in bar and restaurant closure. Two problems which have not been addressed in the public debate is firstly discriminatory effect of the exemptions granted (as was stated earlier an estimated 80,000 workers will not be covered by this ban) and secondly the pre-emptive effect of this law on possible legislation from Europe. Dealing with the pre-emptive effect of this legislation, it seems clear that preventing smoking is a clear objective of the European Community. The harmonization of laws in this area such as Directive 89/552/EEC, Directive 2001/37/EC and Directive 2003/33/EC as well as the non-binding resolutions and recommendations shows a aim at Community level to deal with the problems of Environmental Tobacco Smoke. Take the case of Pubblico Ministero v. Tullio Ratti6. Here Mr Ratti's Italian company had begun packaging and labelling its containers of solvents in accordance with two Council directives regulating the area. These directives had not yet been implemented in Italy, and the requirements of the Italian legislation on the matter were more stringent than those under the directives, providing penalties for those who failed to comply. ...read more.

problem, how can such a proposed law be in keeping with the spirits and aims of Ireland's membership of the European Community and also within the spirit and aims of the Irish constitution. Conclusion: The Public Health (Tobacco) Bill is a welcomed addition to the legislation aimed at protected the lives and the health of workers in this country. The most contentious point in the public debate regarding the prohibition of smoking in the workplace is its application to bars and restaurants. A compromise of sorts was posited; allowing smoking in designated areas which would be serviced by high levels of ventilation removing ETS, creating a safe area for workers. The ventilation compromise was an acceptable abrogation of the Tobacco Control Act 1995 in Finland, but scientific research has since established the futility of such safety measures. In September 2003 the EU Joint Research Centre published a Report on their findings establishing that high ventilation levels could not clear the harmful chemical compounds left by smoking. At best all ventilation could achieve was cosmetic in nature: the removal of the smell of tobacco. Team leader, Dr Kotzia, said the study led to only one conclusion: a mandamus upon the State to ban smoking in public places, in pubs and bars14. The Irish Presidency of the European Union will best be remembered, aside from the possible conclusion of the European Constitution, as the time when Ireland took the lead and banned smoking it the workplace, unconditionality. By removing the exemption for 80,000 workers currently in place, the country will uphold the spirit and aims of both the Irish constitution and the European Union and place this small country as a forerunner in designing community policy, the effect of which will protect the health and welfare of Community citizens as a whole. ...read more.