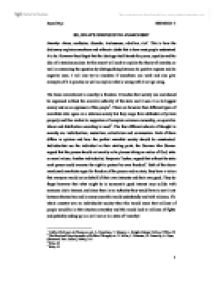 So, whats wrong with Anarchism?

SO, WHAT'S WRONG WITH ANARCHISM? Anarchy: chaos, confusion, disorder, lawlessness, rebellion, riot1. This is how the dictionary explains anarchism and without a doubt this is how most people understand it to be. However they forget that the ideology itself stands for peace, equality and the idea of a stateless society. In this essay I will seek to explain the theory of anarchy, as well as answering the question by distinguishing between its positive aspects and its negative ones. I will also try to elucidate if anarchism can work and also give examples of it in practise as well as explain what is wrong with it as I go along. The basic commitment in anarchy is freedom. It teaches that society can and should be organised without the coercive authority of the state and it sees it as its biggest enemy and as an oppressor of the people2. There are however four different types of anarchists who agree on a stateless society but they range from defenders of private property and free market to supporters of complete common ownership, co-operative labour and distribution according to need3. The four different schools of thought in anarchy are: individualism, mutualism, collectivism and communism. ...read more.

It would be a long process to decide for it and therefore it would probably be too annoying to go through all those unnecessary bureaucracies and the probability of the people getting what they want when they want would be slim. Also the question of crime, if people do not own anything than it would not be a crime if someone took the car without consent because it's theirs as much as everyone else's. However anarchism is not absolutely useless, there are a few points which make it a respectable ideology and could probably work in a modern society. Anarchist ideas can be seen in many of today's laws and movements. It has encouraged liberals to overcome their hypocrisies over matters such as freedom of speech9. Its ideas of human equality, freedom, no coercion and exploitation has helped the feminist movement to achieve some of their goals. Other values for which they stand for such as opposition to violence can be related to pacifism. Another reason why anarchism can be good is that everyone is treated as an equal, in contrast with the capitalist system of USA they only gave African Americans equal rights in 1963, and South Africa ended apartheid in 1993. ...read more.

One of the main faults with it is the fact that there are so many schools of thought and they do not agree with each other on the core issues of anarchy, such as, what kind of system would best work for people, while some argue on pure individual values others argue on some form of authority. Anarchy is based on a very na�ve view of the people where we are meant to trust everyone and work for everyone's good, this would not be at all possible as humans are naturally cynics and their greed and desire for power would always take over. It has never attracted a great number of supporters and the example of Spain shows that it would not work. Also the very idea that there should not be a government contradicts all the present forms of society where advances in technology and the high living standards owe it to the democratic governments which are the norm in most parts of the world. The dictionary and what the majority of the people think are right in my opinion because a state of anarchy would mean a state where there are no laws and from the examples that we might have seen in recent years in different parts of the world, where there is anarchy there is war, destruction, and above all, poverty. ...read more.