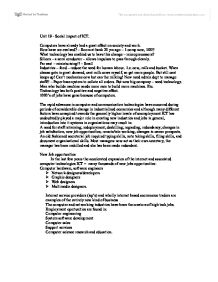 Unit 19 - Social impact of ICT. Computers have already had a great effect on society and work. How have we evolved? - Room at bank 20 yrs ago - 1 comp now, 100!! What technology has enabled us to have this change - microprocessors? Silicon - a semi conductor - allows impulses to pass through cleanly. Far east - miniaturising!! - Small Industries - food - reduce the need for human labour. 1.e. cow, milk and bucket. When cheese gets in great demand, cant milk cows myself, so get more people. But still cant keeps up! Can't mechanise cow but can the milking! Now need admin dept to manage staff!! - Paper base system to collate all orders. But now big company - need technology. Man who builds machine needs more men to build more machines. Etc. Technology has both positive and negative effect. 1000's of jobs have gone because of computers. The rapid advances in computer and communication technologies have occurred during periods of considerable change in industrialized economies and although many different factors have conspired towards the generally higher levels of unemployment ICT has undoubtedly played a major role in creating new industries and jobs in general, introduction into it systems in organizations may result in: A need for staff retraining; redeployment; deskilling; regrading; redundancy; changes in job satisfaction; new job opportunities; remote/tele working; changes in career prospects. ...read more.

It also ignored working realities in most of the developing world. But nevertheless for most of the developed countries, this paradigm provided a basis not only for the structuring of industrial relations but also for social protection systems and retirement pension arrangements. The argument now is that, in any case, this paradigm fails to be appropriate for a network economy where value comes from the manipulation of information and knowledge much more than from the production of material goods. In the process of change, a "job" is becoming redefined simply as "work". AT&T"s vice president for human resources James Meadows put it this way, in a quote attributed to him in the New York Times: People need to look at themselves as self-employed, as vendors who come to this company to sell their skills. In AT&T we have to promote the concept of the whole work force being contingent, though most of our contingent workers are inside our walls. "Jobs" are being replaced by "projects" and "fields of work", giving rise to a society that is increasingly "jobless but not workless".1 Many writers have engaged with this subject. Research on the growth of flexible working practices undertaken for the OECD identified a number of developments, including changes in the design of jobs, greater complexity, higher skill ...read more.

We will begin by exploring further the challenges which face the social partners, considering how the services they currently offer could be provided in other ways by other agencies. We will then investigate the state of industrial relations in one particular sector which has encountered radical change in recent years, the telecommunications industry, to see what evidence for a paradigmatic shift can be found there. We will move on to consider in some detail two examples of new work organisation (call centre working and telework) and two areas where "atypical" working has been growing (agency work and self-employment), to ask whether these are or are not being adequately accommodated within organised industrial relations. We will then turn to consider the degree to which the traditional industrial relations negotiating agenda has been extended by ICT. This will take us into a number of areas, including on-line rights for workers, questions of privacy and electronic surveillance and the increased relevance of copyright and intellectual property rights. We shall look at examples of how the social partners, and in particular the trade unions, are themselves making use of ICT opportunities. Finally, at the end of this journey, we shall return to the issue posed at the start of this chapter, hopefully in a better position to offer some conclusions. ...read more.