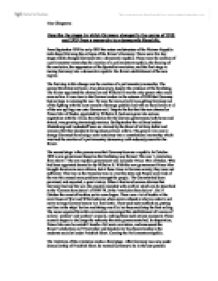 Describe the stages by which Germany changed in the course of 1918 and 1919 from a monarchy to a democratic Republic. From September 1918 to early 1919 the nature and structure of the Weimar Republic took shape following the collapse of the Kaiser's Germany. There were five key stages which changed Germany into a democratic republic. These were the creation of a parliamentary monarchy; the creation of a parliamentary republic; the freezing of the revolution; the suppression of the Spartakist revolution; and the final stage in turning Germany into a democratic republic: the formal establishment of the new regime. The first step in this change was the creation of a parliamentary monarchy. The second Reich had not been a true democracy, despite the existence of the Reichstag. The Kaiser appointed the chancellor and Wilhelm II was the only person who could remove him. It was clear to the German leaders in the autumn of 1918 that Germany had no hope in winning the war. By now the main priority was getting Germany out of the fighting with the least amount of damage possible and with no humiliation at all of the war spilling over onto German soil. ...read more.

The news acquired from this commotion encouraged the establishment of a series of sailors', soldiers' and workers' councils, making these such actions necessary. These councils began to challenge the authority the state governments had. In desperation, Prince Max saw he couldn't handle a full scale revolution, and announced the Kaiser's abdication on 9 November and handed over his chancellorship to the moderate socialist leader Friedrich Ebert. Creating the Parliamentary republic. The limitation of the revolution marks a third stage. After Germany was now under chancellorship of Friedrich Ebert, he wanted Germany to be in the best possible condition it could after the results of the war. Ebert wanted to make quick action to find a way to keep Germany going strong and became very lucky in his path. On 10 November General Wilhelm Groener, Ludendorff's successor, telephoned Chancellor. They had a very significant conversation. The supreme army command agreed to support the new government and to use troops to maintain the stability and security of the new republic. In return Ebert promised to go against the spread of revolutionary socialism and to preserve the authority of the army officer's .This was called the 'Ebert-Groener pact'. ...read more.

In many respects the results represented a major success for the forces of parliamentary democracy: the high turnout of 83 per cent in the election suggested faith in the idea of democracy. 76.1 per cent of the electorate voted for pro-democratic parties. The solid vote for the three main democratic parties, the SPD, the DDP and the ZP, made it straightforward to form a coalition government, which became known as the 'Weimar Coalition'. To conclude it can be seen that Germany as a country went through a lot of stages and problems to get from the title of being a constitutional monarchy to becoming a democratic republic. It can be seem that some stages had more effect than others and that some stages were just openings for other stages for Germany to get to the democratic stage. The toughest part wasn't changing from a monarchy to a democratic republic, but the results and things that happened in between, such as things decided and moves made. Progress that can be seen going from when the monarchy was made to when the democratic republic was formed shows much hard work that Germany had to go though although it only took one year, the process was not as easy as it seems. ?? ?? ?? ?? Tino Chingwaru ...read more.