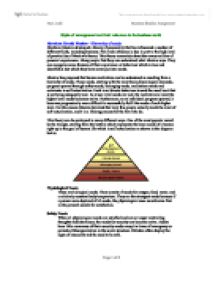 Styles of management and their relevance to the business world Abraham Harold Maslow - Hierarchy of needs Abraham Maslow developed a theory of personality that has influenced a number of different fields, including business. This wide influence is due in part to the high level of practicality of Maslow's theory. This theory accurately describes many realities of personal experiences. Many people find they can understand what Maslow says. They can recognize some features of their experience or behaviour which is true and identifiable but which they have never put into words. Maslow has proposed that human motivation can be understood as resulting from a hierarchy of needs. These needs, starting with the most basic physiological demands, progress upward through safety needs, belonging needs, and esteem needs and culminate in self-actualization. Each level directs behaviour toward the need level that is not being adequately met. As lower-level needs are met, the motivation to meet the higher-level needs becomes active. Furthermore, as an individual progress upward, it becomes progressively more difficult to successfully fulfil the needs of each higher level. For this reason Maslow believed that very few people actually reach the level of self-actualization, and it is a lifelong process for the few who do. ...read more.

Maslow describes self-actualization as a person's need to be and do that which the person was "born to do." These needs make themselves felt in signs of restlessness. The person feels on edge, tense, lacking something, in short, restless. If a person is hungry, unsafe, not loved or accepted, or lacking self-esteem, it is very easy to know what the person is restless about. It is not always clear what a person wants when there is a need for self-actualization. Another way of showing Maslow's theory is by using the human body as an example: Douglas McGregor - Theory X and Theory Y McGregor's X-Y theory is a salutary and simple reminder of the natural rules for managing people, which under the pressure of day-to-day business are all too easily forgotten. McGregor maintained that there are two fundamental approaches to managing people. Many managers tend towards theory x, and generally get poor results. Enlightened managers use theory y, which produces better performance and results, and allows people to grow and develop. Theory X ('Authoritarian Management' style) * The average person dislikes work and will avoid it he/she can. ...read more.

A more popular view of the relationship found in the work place between managers and workers, is explained in the concepts of Theory Y. This theory assumes that people are creative and eager to work. Workers tend to desire more responsibility than Theory X workers, and have strong desires to participate in the decision making process. Theory Y workers are comfortable in a working environment which allows creativity and the opportunity to become personally involved in organisational planning. Some assumptions about Theory Y workers are emphasised in one of the texts, namely that this type of worker is far more prevalent in the work place than are Theory X workers. For instance, it is pointed out that ingenuity, creativity, and imagination are increasingly present throughout the ranks of the working population. These people not only accept responsibility, but actively seek increased authority. According to another of the authors studied for this project, in which the "participative" (Theory Y) leadership style is discussed, a participative leader shares decisions with the group. Also mentioned, are subtypes to this type of leader, namely the "Democratic" leader who allows the members of the working group to vote on decisions, and the "Consensual" leader who encourages group discussions and decisions which reflect the "consensus" of the group. Neel Joshi Business Studies Assignment Page 1 of 4 ...read more.