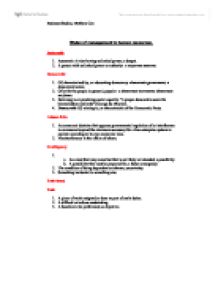 Styles of management in human resources.

Styles of management in human resources. Autocratic 1. Autocratic A ruler having unlimited power; a despot. 2. A person with unlimited power or authority: a corporate autocrat. Democratic 1. Of, characterized by, or advocating democracy: democratic government; a democratic union. 2. Of or for the people in general; popular: a democratic movement; democratic art forms. 3. Believing in or practicing social equality: "a proper democratic scorn for bloated dukes and lords" (George du Maurier). 4. Democratic Of, relating to, or characteristic of the Democratic Party. Laissez-faire 1. An economic doctrine that opposes governmental regulation of or interference in commerce beyond the minimum necessary for a free-enterprise system to operate according to its own economic laws. 2. Noninterference in the affairs of others. Contingency 1. a. An event that may occur but that is not likely or intended; a possibility. b. A possibility that must be prepared for; a future emergency. 2. The condition of being dependent on chance; uncertainty. 3. Something incidental to something else Task-based Task 1. A piece of work assigned or done as part of one's duties. 2. A difficult or tedious undertaking. 3. A function to be performed; an objective. ...read more.

In other words, a leader has got to be charismatic enough to infect his workforce with the will and motivation to get the task done. The primary key in achieving this revolves around the notion of "vision". It is axiomatic that every winning team must have a vision. Without it a team will never succeed simply because without vision, a team can't even know what success is and certainly won't know how to get there. Sort of like a headless chicken running around. A leader's vision is his definition of what success is to him as a team. He is the man who knows what is to be done and it's his job to ensure that he conveys this picture to the rest of the team correctly, so that they in turn can get the job done. Hence, a leader's vision is what pulls the whole thing along. It is what the team struggles for, competes for, fights for and sacrifices for and under the correct leadership, will successfully attain. Vision thus gives a team a mission, a sense of purpose to get excited about and a reason for being charged up, enthused and motivated. ...read more.

Instead, they allow all forms of interruptions and often think that they know what the speaker is trying to say, when in truth they stopped listening a long time ago. By listening, you show the speaker that they have your attention. Good listeners give focused and undivided attention as they are interested in finding the best way or solution and not having their own way. That's what makes the difference between a leader and a dynamic leadership. A leader is someone who can organise the work to be done and see it through to its completion. Dynamic leadership will not only see the project to the end but in the process it will bring out the best talent in each individual team member and as a result, the end work will be of a phenomenal calibre. The leader who can generate good leadership is essentially someone who ensures that his team understands and can themselves articulate the team vision and goals. Remember that communication is not just a matter of what you say but of what they hear you say. Therefore, good and effective communication is the key here. A good leader will be able to talk to the team, infect them with the optimism to succeed and when they are sold on the idea, gently guide them to a resounding victory. Business Studies, Matthew Cox ...read more.