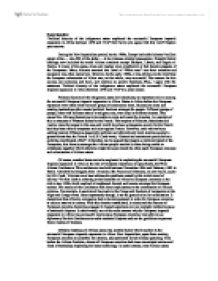 Cook, "alleviate or at least address the problems raised by this initial round of activity." To this Cook is referring to the Scramble of Africa by European countries in the mid to late 1800s which resulted in heightened discord and tension amongst the European nations. The results of the Conference had direct implications to the colonization of African colonies. For example, it sanctioned free trade in the Congo and freedom of navigation on the Niger and Congo rivers. Most importantly though, it set the ground rules for colonization. It determined that effective occupation had to be demonstrated in order for European countries to claim a state as its colony. With this doctrine established, it minimized the chances of European countries becoming engaged in heated arguments or even outright warfare because of territorial disputes. In other words, one of the main reasons why the European imperial expansion in Africa was successful was because European countries were able to use diplomacy like this Conference to settle territorial disputes and set the guidelines to prevent future clashes of interests. ...read more.

Even if patriotic and religious appeals of African leaders managed to rally scores of thousands, it was often not enough to hold back the tide of European invaders. Tens of thousands of African and Arabs united under Abushiri in East Africa were crushed by German forces while in South Africa, the united and numerous Boers were defeated (though with much difficulty) by the British. Simply, these under-armed men were just no match for the superiorly armed European soldiers. The West African Conference is also not convincing as a main reason because it merely set the guidelines for colonization for European countries to follow. As S.B. Cook argued, "the wholesale partition of Africa did not result from the Conference but from... incremental occupation." The ground rule for a colony to be recognized was that it be effectively occupied by Europeans. This again was often achieved through military force. Thus, I believe that the European expansion was successful because the Africans lacked the military and technological might that the Europeans had. Vast numbers mean nothing and resistance without supplies or weaponry is futile in modern warfare. ?? ?? ?? ?? ...read more.