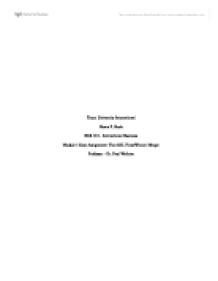 Touro University International Kevin P. Beck BUS 401 - International Business Module 1 Case Assignment: The AOL-Time/Warner Merger Professor - Dr. Paul Watkins American and European governmental agencies voiced serious concerns when AOL and Time/Warner announced their intentions to join forces and form the largest corporate alliance the business world had ever experienced. Due to the broad implications of such a merger, the plan was closely scrutinized and several hurdles were encountered on the path to approval. This paper will examine online music distribution as the most important issue considered in the European approval process. It will also explain the key difference in how the Europeans assessed their issues compared to the Americans. Let's begin by exploring what the Europeans deemed to be the most critical aspect of this monumental partnership. When details of the planned merger were announced, the European Commission began to examine the implications. In fact, in the early stages the commission issued a 45-page statement outlining a series of concerns that were initially very similar to the issues raised in the United States. ...read more.

In Europe, AOL did not have sufficient pre-existing infrastructure to monopolize Internet access. This allowed the commission to center it's demands on successfully getting AOL to sever it's existing links with German music giant Bertelsmann AG. To further appease commissioners, Time/Warner called off it's planned joint venture with British rival EMI Group PLC. According to Mario Monti, one of the 20 commissioners who approved the merger, "In a music market already characterized by a high degree of consolidation, the danger, which has been averted, was that by allowing AOL to effectively team up with three of the five majors the resulting integrated company could have dominated the online music distribution market and music players."3 This was enough for the European Commission to give the deal a green light; AOL and Time/Warner still needed U.S. approval. As mentioned earlier, in the United States the Federal Trade Commission (FTC) approached the issues from a different aspect than the one the Europeans had chosen. ...read more.

The Europeans perceived monopolization of the online music distribution sector to be the biggest threat but they successfully applied pressure to prevent the formation of dominant partnerships within the sector. In the U.S., the priority was ensuring competitors could continue to provide general access to high-speed services alongside AOL-Time Warner, who eventually accepted FTC restrictions designed to ensure such access. The merger highlighted some of the challenges businesses and governments potentially face during the globalization process and how the approach taken to overcome the issues depends on what's at stake for each party involved. 1 The Industry Standard; EU to Object to AOL-Time/Warner Merger; found at http://www.thestandard.com/article/0,1902,18198,00.html on December 13, 2002 2 John R. Wilke; The Wall Street Journal Online; Time/Warner, AOL Criticized by European Antitrust Enforcers; found at http://interactive.wsj.com/articles/SB967687873210096017.htm on December 14, 2002 3 Internetnews.com; AOL-Time/Warner Merger Gets European Approval; found at http://www.internetnews.com/isp-news/article.php/482041 on December 14, 2002 4 Thor Olavsrud; Internetnews.com; FTC Approves AOL Time/Warner Merger With Hefty Restrictions; found at http://www.internetnews.com/xSP/article.php/536161 on December 10, 2002 ...read more.