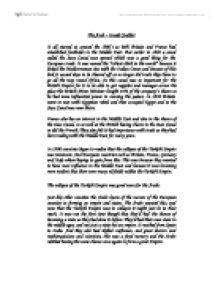 The Arab - Israeli Conflict It all started at around the 1900's as both Britain and France had established footholds in the Middle East. But earlier in 1869 a canal called the Suez Canal was opened which was a good thing for the European trade. It was named the "richest ditch in the world" because it linked the Mediterranean Sea with the Indian Ocean and because of this link it caused days to be sheared off as no longer did trade ships have to go all the way round Africa. As this canal was so important for the British Empire for it to be able to get supplies and messages across the place the British Prime Minister bought 44% of the company's shares so he had some influential power in running the palace. In 1892 Britain went to war with Egyptian rebels and then occupied Egypt and so the Suez Canal was now theirs. France also has an interest in the Middle East and also in the shares of the Suez Canal, so as well at the British having shares in the Suez Canal so did the French. ...read more.

The Romans destroyed the Jewish temple in Jerusalem (their holy city) and so as their focus of religion was destroyed so was their way of life. After a second revolt in 135 AD the Jews where banished from their own land. The people that survived the revolt where left to wonder over the land. They all split up in all directions some in France, Spain and others in places in the Middle East. For 19 centuries did the Jews have no homeland, 19 centuries!!! But many did not give up hope in returning to Zion/Jerusalem. Not only did the Jews have no homeland but they also got persecuted in many places all across the world. France persecuted them in 1096 and so did the Spain in 1480 and 1492, many died as they were burnt at the stake. Many moved east but that did not work out either. In 1881 and 1914 three million Jews fled Eastern Europe and over one and a half fled to America. No one really knows why everyone hates the Jews so much but there are a few speculations. Some believe that it's because they are the "chosen people". ...read more.

But as Britain just left it as it was more and more violence occurred. In 1941, 212 people died and Britain had the most deaths at 89. And as a result of this Britain asked the United Nations to take back the Mandate and for then to look after the country and its future. In response the UN sets up a committee to deal with Palestine. The committee went round the Middle East to collect evidence from both sides, but as this was happening violence continued. But after a while they can to a decision that the Arabs and the Jews should share the land in two different states. But this soon raised issues with the Arabs because they believed that they where getting the rubbish land and less land. The Arabs had 3 times the amount of people than the Jews, but the Jews got more land. The Jews also only originally owned 1 tenth of the land but yet they where getting more than the Arabs. The Arabs also did how have access to the sea and claimed they had all the rubbish farming land. But in November of 1947 he committee voted for the partition to take place. The partition was to take place 6 months after this date. ...read more.