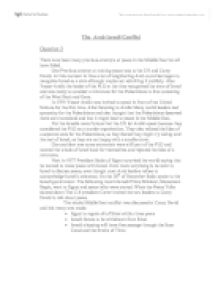 The Arab Israeli Conflict Question 3 There have been many previous attempts at peace in the Middle East but all have failed. One Previous attempt at making peace was at the UN and Camp David. At this moment in time a lot of neighboring Arab countries began to recognize Israel as a state although maybe not admitting it publicly. Also Yasser Arafat the leader of the PLO at the time recognized the state of Israel and was ready to consider a mini state for the Palestinians to live consisting of the West Bank and Gaza. In 1974 Yasser Arafat was invited to speak in front of the United Nations for the first time. After listening to Arafat Many world leaders had sympathy for the Palestinians and also thought that the Palestinians deserved there own homeland and that it might lead to peace in the Middle East. But the Israelis were furious that the UN let Arafat speak because they considered the PLO as a murder organization. ...read more.

This Problem made a great Breakthrough in Arab-Israeli relations but the Palestinians were still at the heart of the Conflict in the Middle East. In 1993 the Israeli-Palestinian peace agreement was made. This all started when in 1988 Arafat publicly rejected terrorism, now the United states were openly willing to negotiate with the PLO and put pressure on the Israelis to open peace talks with the Palestinians. In October 1991, the US government persuaded the Israelis to have face-to-face talks with Palestinian leaders. These talks were held in Madrid. Little progress was made in the talks while extremists on both sides attempted to disrupt the discussions by acts of violence. In 1993 discussions started up again and finally in September after 8 months of Secret talks a breakthrough was made. Yasser Arafat and the Israeli leader Yitzhak Rabin exchanged letter. In Arafat's letter he rejected the use of terrorism, called for the end of the Intifada and recognized the right of Israel to exist in peace and security. ...read more.

The Israelis were determined to ensure they controlled the city and that it remained their Capital. By the late 1990s East Jerusalem that was mostly Arabs was encircled by Israeli settlements containing 150,000 Israelis. Another Problem was the refugees who left Israel and fled to neighboring Arab countries during the fighting. Most Israelis believe that the refugees should not be able to return. This is because the Israelis don't want to feel swamped by Palestinians, and for them to form the majority of the Population. Another problem that exists is the Israeli settlements on the West Bank. Should these settlements be given up or should they continue to guard the settlement and protect the Jewish Israelis. The last Problem is about the Independent Palestinian state. This is because many Palestinians want the whole of Palestine back and not just a small mini state. They also believe that the mini state wouldn't be there own independent state as there would always be Israeli troops would still be stationed in parts of the West Bank. These 4 points show the problems that need to be overcome before a peace agreement can be finally agreed. ...read more.