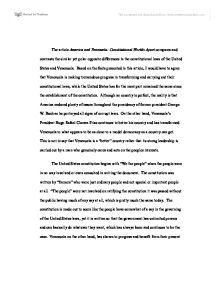 The article America and Venezuela: Constitutional Worlds Apart compares and contrasts the similar yet polar opposite differences in the constitutional laws of the United States and Venezuela. Based on the facts presented in this article, I would have to agree that Venezuela is making tremendous progress in transforming and carrying out their constitutional laws, while the United States has for the most part remained the same since the establishment of the constitution. Although no country is perfect, the reality is that America endured plenty of issues throughout the presidency of former president George W. Bush as he portrayed all signs of corrupt laws. On the other hand, Venezuela's President Hugo Rafael Chavez Frias continues to better his country and has transformed Venezuela to what appears to be as close to a model democracy as a country can get. This is not to say that Venezuela is a "better" country rather that its strong leadership is carried out by a man who genuinely cares and acts on the peoples interests. ...read more.

Prior to his election into office, Venezuela was an extremely corrupt country where the people didn't seem to have much say about anything at all. Immediately upon his election into presidency, Chavez held a national referendum in which his people had the opportunity to decide if they wanted to draft a new constitution that would be based around his image of what he wanted the country to be like. In December of 1999 the new constitution passed under his rule which tremendously improved and continues to improve everything for the country of Venezuela. The differences in the way in which the "constitutional" laws are carried out between the two countries couldn't be more different. The United States government is comprised of three branches: the Legislative, Judicial, and Executive branches of government while Venezuela's is comprised of the Legislative branch, the Office of the President, and the Judicial System of government. ...read more.

Lastly, the United States Judicial branch of government (Supreme Court) comprised of the Circuit Court of Appeals which has twelve courts throughout the United States, and the District Courts (91 trial courts throughout the U.S.) Venezuela's judicial branch is a work in progress due to its corruption before Chavez came into office. The many variations between the two systems lead me to believe that the Venezuelan government is a true model democracy because while the United States has remained the same since the creation of the constitution, Venezuela has shown significant progress in making alterations to their constitution by continuing to work on making their country better literally for and by the people. The fact that Chavez got his citizens involved (and kept them involved) in these changes right away makes it a democracy in it of itself. The American governments' main interest is focused and based off of white male property owners and the constitution wasn't written to better anybody other than the people that fit into that category, while Venezuela rewrote their laws to benefit their people. ...read more.