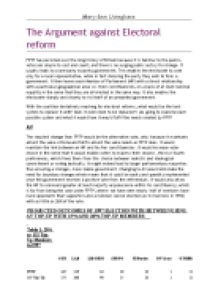 The case Against Electoral Reform

﻿Mary-Ann Uvieghara ________________ The Argument against Electoral reform ________________ FPTP has persisted over the long history of Britain because it is familiar to the public, votes are simple to cast and count, and there is no surging public outcry for change. It usually leads to a one-party majority government. This enables the electorate to vote only for a local representative, while in fact choosing the party they wish to form a government. It then leaves each Member of Parliament (MP) with a direct relationship with a particular geographical area i.e. their constituencies, on a basis of at least nominal equality in the sense that they are all elected in the same way. It also enables the electorate sharply and cleanly to rid itself of an unwanted government. With the coalition tentatively reaching for electoral reforms, what would be the best system to replace it with? Does it even need to be replaced? I am going to examine each possible system and what it would how it would fulfil the needs created by FPTP AV The simplest change from FPTP would be the alternative vote, why -because it maintains almost the same criteria and fulfils almost the same needs as FPTP does. It would maintain the link between an MP and his/her constituencies .It would increase voter choice in the sense that it would enable voters to express their second , third or fourth preferences, which frees them from the choice between realistic and ideological commitment or voting tactically. ...read more.

be avoided by increasing the number of MPs leading to a whole different set of problems.STV, offering a range of MPs has the effect of being asked a series on unnecessary questions which would lead to boredom and irritation which leads to casting random and therefore meaningless votes. Many only interested in voting for parties would not appreciate being forced into choosing between candidates of the same party about each of whom they know little. It is the counting rather than the casting of the votes which is excessively complicated under STV. This complexity and consequent slowness of counting cannot be counted as an advantage.A Speaker's Conference on electoral reform in January 1917 unanimously recommended single transferable vote (STV) for elections to the House of Commons. However, in a vote that August, the Commons rejected STV by 32 votes in the committee stage of the Representation of the People Bill- its already been rejected before. The introduction of STV would be too great a leap from FPTP, going in a direction that is undoubtly different that the one existing, causing confusion. Considering the less densely populated constituencies, reconciling with the break of the bond between the MP would be hard and time consuming. Additional Member System If we do not go in an STV direction the alternative must be the Additional Member System (AMS). This has worked very well in Germany for half a century, why won?t it work for us? ...read more.

Public Interest The question asked was- if a referendum were held tomorrow on whether to stick with first-past-the-post or switch to the Alternative Vote for electing MPs, how would you vote? Poll done by YouGov For AV For FPTP Wouldn?t vote Don?t know 2010 % % % % November 14-15 33 40 7 20 October 17-18 33 41 6 19 September 5-6 35 39 8 18 August 15-16 37 38 7 18 July 18-19 39 38 7 17 June 27-28 42 34 5 18 As shown by the chart and subsequent graph, public interest in AV and the coalitions plans are slowing dwindling-this is not helped by the opposition launched by Labour and some Tory members. If the government themselves are divided on it (51 per cent of Tories were anti-AV with about 30 per cent in favour. The rest were neutral.)And the public are slowly but surely realising the harm and confusing that the electoral reforms as a whole would cause, why would it be a good thing. By early June, the support for AV was a thin 42% compared to the 34% vying for FPTP, and it began to slowly climb while FPTP accelerated in drips. What?s interesting though id the increase in the percent of people that that are still undecided. By the time the referendum comes, predicts political bloggist Jim Pickard, support may plummet as low as support for the lib dems. Chart Conclusion I can conclude that after scrutinizing the various electoral systems available and taking into consideration public interest, electoral reforms would not be the way to go-after all if it aint broke why fix it? ...read more.