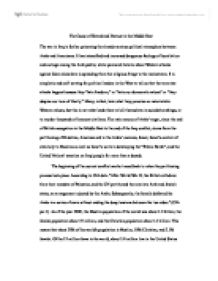 The Cause of Hatred and Distrust in the Middle East.

The Cause of Hatred and Distrust in the Middle East The war in Iraq is further poisoning the already noxious political atmosphere between Arabs and Americans. It has intensified and increased dangerous feelings of humiliation and outrage among the Arab public, while paranoid rhetoric about Western attacks against Islam elsewhere is spreading from the religious fringe to the mainstream. It is simplistic and self- serving for political leaders in the West to tell us that the terrorists attacks happen because they "hate freedom," or "hate our democratic values" or "they despise our love of liberty." Many, in fact, hate what they perceive as materialistic Western values, but this is not what leads them to kill themselves in suicide bombings, or to murder thousands of innocent civilians. The main source of Arabs' anger, since the end of British occupation in the Middle East to the end of the Iraq conflict, stems from the partitioning of Palestine, American aid to the Arabs' enemies, Israel, Israel's control of sites holy to Muslims as well as Israel's work in developing the "Ethnic Bomb", and the United Nations' sanction on Iraqi people for more than a decade. The beginning of the current conflict can be traced back to when the partitioning process took place. According to CIA data: "After World War II, the British withdrew from their mandate of Palestine, and the UN partitioned the area into Arab and Jewish states, an arrangement rejected by the Arabs. ...read more.

In addition, Israel's control over holy sites for many years has heated the tension to its maximum level. At stake is administration of the Muslim sites in the Old City, principally the Dome of the Rock and Al Aqsa mosque, both located in the Haram Al-Sharif (Noble Sanctuary), known to Israelis as the Temple Mount. Muslim attachment to the sites rests on three principal bases. First, because Islam recognizes biblical prophets as Muslim messengers, the location of Solomon's temple is considered an important Islamic site. Jerusalem is intimately linked to important events in the lives of other Islamic prophets, including Abraham, Lot, David, Moses and Jesus. Jerusalem was also the first qibla, or direction of prayer, for the Muslim community of the Prophet Muhammad. Some sixteen months after his hijra, or flight to Medina, the Prophet received a revelation instructing him to turn toward the Ka'ba at Mecca instead, but Jerusalem, or Beit al-Maqdis ("The Holy House," from Solomon's temple) as it was called, is still revered as "the first qibla." Finally, Masjid Al Aqsa ("the Furthest Mosque") was where the Prophet was taken by a winged steed, Buraq, before ascending to and returning from Paradise during the Night Journey, or Isra' wal-Mi'raj. The incident is related in the Qur'an, which refers to "the Furthest Mosque, whose precincts we have blessed." Jerusalem fell to the Muslims in 637, five years after the death of the Prophet, when the Caliph Umar ibn al-Khattab came to the city to arrange a pact with the city's Christian inhabitants. ...read more.

Warnings came from three U.N. Secretary Generals, agencies including UNICEF, WHO and WFP, and two humanitarian coordinators, who resigned in protest. A Select Committee of the British House of Commons offered this negative judgment: "The U.N. Security Council shares responsibility for the humanitarian crisis." The United States and the United Kingdom, who use their veto power to prolong the U.N. sanctions, bear special responsibility for the U.N. action. The Security Council implicitly accepts such a negative assessment, since it no longer uses comprehensive economic sanctions in security crises elsewhere in the world. Civilian suffering in Iraq is not an unexpected collateral effect, but a predictable result of the sanctions policy. No-fly zones, periodic U.S. military attacks, and U.S. threats of regime-change block peaceful outcomes, as do vilification of Saddam Hussein, pro-sanctions propaganda, and other politicization of the crisis (BBC News page1). It is essential that our government move quickly and decisively to ensure that Israel's colonial occupation is ended, and that the United States is seen as a driving force in freeing the Palestinian people. Without this step, it may be impossible to convince most Arabs that American foreign policy has anything to offer them other than war, occupation and humiliation. These steps must be serious and sustained, and require far more than unpublished road maps and unelected prime ministers of non-existent states. Without a complete and final end to Israel's occupation, no amount of success in post-conflict Iraq will mean anything positive for the region, and no substantial healing of the wounds can begin. ...read more.