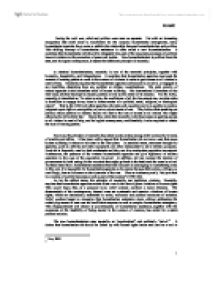 During the cold war, relief and politics were seen as separate. Yet with an increasing recognition that relief alone is insufficient for the complex humanitarian emergencies, many humanitarian agencies have come to rethink the relationship between humanitarianism and politics. This shifting concept of humanitarian assistance is often called a new humanitarianism. It considers that humanitarian aid should be integrated into part of the long term processes of political issues in relation to the promotion of peace and justice. New humanitarianism is political from the start, and its logical consequence, it rejects the traditional principle of neutrality. In classical humanitarianism, neutrality is one of the essential principles, together with humanity, impartiality, and independence. It considers that humanitarian agencies must seek the consent of warring parties to work in the context of violence in order to gain access to all victims in need of help. Neutrality requires that humanitarian agencies not become involved in, or engaged in any hostilities, abstaining from any political or military considerations. The main priority of neutral agencies is the immediate relief of human suffering. The International Committee of the Red Cross (ICRC) has kept its neutral position at war as the centre of its mission. For the ICRC, neutrality is described as, "in order to enjoy the confidence of all, the Movement may not take sides in hostilities or engage at any time in controversies of a political, racial, religious, or ideological nature". ...read more.

The characteristic of the contemporary internal wars are systematic and massive violations of human rights, which are intrinsically embedded in social, economic and political structures of societies. Relief workers began to recognize that humanitarian assistance alone without addressing the underlying causes of wars was an insufficient response to such a complex humanitarian emergency. This disappointment and shame at powerlessness of humanitarian assistance, together with the awareness of the feasibility of being neutral in the context of violence, has called for a stable political solution. The new humanitarianism sees neutrality as "unprincipled" and politically "na�ve".2 It claims that humanitarian aid should be linked up with human rights issues and used as a tool to accomplish the long-term political and developmental objectives leading to peace and justice.3 This approach to humanitarian emergencies has been accepted by newer humanitarian agencies and NGOs, like Medecins Sans Frontieres (MSF). These agencies and NGOs reject the principle of neutr4ality, and instead support the principle of impartiality that allows them to make a judgment on a conflict situation, that is, to speak out.5 For instance, MSF claims that it "refuses to wait for the approval of all parties before acting. It insists on the right to speak out in the face of human rights violations, because "[it is] not sure that speaking out always saves lives, but [it is] certain that silence kills". ...read more.

Those groups that comply with the Western version of human rights and conflict resolution will receive aid. Those that reject western values will be left to their fate. In this way conditional humanitarian aid is becoming yet another tool available to western governments to control developing countries. Defining a new universal set of moral values. Developmental relief and the new human rights humanitarianism are all based on western moral values which are necessarily posited in opposition to the barbarism of conflicts in developing countries. One principle worth reviving from the list of traditional humanitarian assistance is universalism- the right of everyone to receive humanitarian relief in times of crisis. People dying without food, water, and medicines should receive unconditional humanitarian aid. The human rights approach, developmental aid and the rejection of neutrality amount to the politicization of humanitarian aid. Humanitarian aid cannot be divorced from politics. Warring sides, international agencies and foreign governments can manipulate relief for political ends. But the political manipulation of humanitarian aid is entirely different to the conscious use of humanitarian aid by agencies to pursue the political ends that is proposed by new humanitarianism. (fox) DEC, "Agencies and donors alike have downgraded the humanitarian imperative in favour of conditional assistance linked to peace-building processes 1 Fox, 2001 2 3 Fox, 2001 4 A speech given by the MSF president, Biberson (1999), cited in Fox, 2001, pp. 277 5 Fox, 2001, pp.277 6 Fox, 2001, pp.278 0352687 1 ...read more.