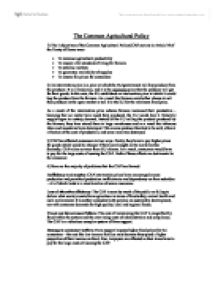 The Common Agricultural Policy 1) The 5 objectives of the Common Agricultural Policy (CAP) set out in Article 39 of the Treaty of Rome were: * To increase agricultural productivity * To ensure a fair standard of living for farmers * To stabilise markets * To guarantee availability of supplies * To ensure fair prices for consumers 2) An intervention price is a price at which the EU/government will buy produce from the producer. It is a fixed price, and it is the minimum price that the producer will get for their goods. In this case, the EU established an intervention price at which it would buy the produce from the farmers. As a result the farmers could either choose to sell their produce on the open market or sell it to the EU for the minimum fixed price. As a result of the intervention price scheme farmers increased their production - knowing that no matter how much they produced, the EU would buy it. Naturally supply began to outstrip demand. Instead of the EU selling the produce produced by the farmers, they have stored them in large warehouses and as a result the infamous lakes and mountains have developed. This excess produce then had to be sold, often at a fraction of the cost of production, and some was even destroyed. ...read more.

As a result, many farmers would go bankrupt and many jobs would be lost in the countryside. Consequently there would be mass rural-to-urban migration causing major depopulation in the countryside. As a result the countryside would deteriorate and taxpayers would lose out, as they would have to pay for the rejuvenation of the countryside. This is an argument from farmers who are reluctant for reform. Also, many farmers in Spain, Italy and France are against reform as they are the main beneficiaries from the CAP. In fact many of farmers are against CAP reform, as they would stand to lose a lot if it was reformed - and so through their own greed they oppose the notion of reforming the CAP. 6) If the EU was enlarged, then this would have a major impact on the CAP. This is because a large of majority of the members would be from Eastern Europe. And so, hypothetically, 10 new member states from Eastern Europe - most with large, poor agricultural sectors would qualify for billions of euros in subsidies under an unreformed CAP. These countries have a greater dependency on farming as a source of income and jobs. Many of the farms in these countries are much smaller and poorer than their Western European counterparts - a major problem given the bias within the CAP to offer disproportionately more financial support to larger more efficient farms. ...read more.

The effects of reform in the short to medium term will vary from nation to nation within the EU and there are likely to be significant regional implications for individual countries. Some of the main issues to consider are as follows: Will reductions in direct payments for production stimulate increases in farm productivity arising from a switch to larger-scale production? Will reforms to the CAP stimulate improvements in the efficiency of the UK and European farming industry? Supporters of reform believe that cutting dependency on financial support will encourage farmers to diversify the use of their land including breaking into rural tourism and focusing resources on supplying niche products to local markets. Will there be sufficient geographical and occupational mobility in the farming industry to offset many of the likely tensions and problems that structural change will cause? The main risk is a sharp rise in structural unemployment and associated problems of rural poverty. That said, the British farming industry has suffered greatly in recent years even without fundamental reforms to the CAP. Will there be massed forced sales of land leading to a collapse in farm land prices? And, how will smaller farms survive? Should governments target financial assistance on poorer farmers? All these problems and more need to be considered and then reform can take place for a better and more successful CAP. ...read more.