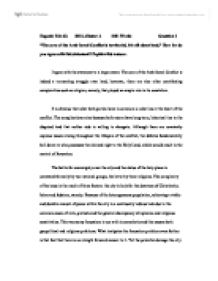 &quot;The core of the Arab-Israel Conflict is territorial, it's all about land.&quot; How far do you agree with this statement? Explain your answer.

Eugenia Toh (6) S410, Cluster A 1081 Words Question 2 "The core of the Arab-Israel Conflict is territorial, it's all about land." How far do you agree with this statement? Explain this answer. I agree with the statement to a large extent. The core of the Arab-Israel Conflict is indeed a tormenting struggle over land; however, there are also other contributing complexities such as religion, namely, that played an ample role in its escalation. It is obvious that what both parties have in common is what lies at the heart of the conflict. The complications arise because both actors have long-term, historical ties to the disputed land that neither side is willing to abnegate. Although there are constantly copious issues arising throughout the lifespan of the conflict, the debates fundamentally boil down to who possesses the claimed right to the Holy Land, which would result in the control of Jerusalem. The battle for sovereignty over the city and the status of the holy place is contested formerly by two national groups, the latter by three religions. ...read more.

Another example of an unanswered land problem is one centered on the Gaza Strip and West Bank. In 1993, the Israel-PLO Declaration of Principles on Interim Self-Government Arrangements (DOP) or the Oslo Accords, was signed. This agreement allowed for a transitional period of less than five years, for Palestinian interim governance in the Gaza Strip and the West Bank. Under this compromise, Israel agreed to dismantle their settlements and also handed over certain responsibilities to the Palestinian Authority, such as the lucrative hot house industry, to assist economic development. Despite most of the strip's control being put in the hands of the Palestinian government, the DOP maintained that Israel would still be honored with the responsibility of security (both internal and external), for public order of settlements and also be accountable for the well-being of the Israeli citizens. The West Bank is another pertinent focal point in the conflict. It contributes greatly in the journey towards peace between Israel and its neighbors, the political status of several Arab states, the reliability of the American regime to exercise it's international political power and the accuracy of their policies. ...read more.

There is a substantial amount of intolerance between the Muslims, Jews and Christians. Throughout centuries, the Arabs have continuously persecuted the Jews and Christians, resulting in the mass emigration of believers in the latter sects. Some infer that the Islamic religion is being contorted into a ideology and a strategy to force the non-Muslims out of Arab. Islamism is a staunch and powerful religious denomination. These Islamic countries are proven to have owned the largest tract of land ever dominated by a single empire worldwide, thus, to the Muslims, the infringement of a Jewish state smack in the center of their land serves as none other but an obstacle that would impede their success as a religion. What remains certain is that the principal cause of the Arab-Israeli conflict is deeply rooted in territorial debates, because it is what connotates religious and political influences. None the less, it is inevitable that the conflict of interests of the Arabs and the Israelis is induced by the tussle over sovereignty of land and the discrepancies that it uproots in the negotiation process. ...read more.