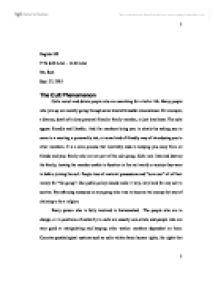 English 100 T Th 9:00 A.M. - 11:00 A.M. Ms. Ru�z Sept. 27, 2001 The Cult Phenomenon Cults recruit and detain people who are searching for a better life. Many people who join up are recently going through some kind of stressful circumstance. For example, a divorce, death of a close personal friend or family member, or just loneliness. The cults appear friendly and likeable. And the members bring you in slowly by asking you to come to a meeting, a personality test, or some kind of friendly way of introducing you to other members. It is a slow process that inevitably ends in keeping you away from all friends and your family who are not part of the cult group. Cults ruin lives and destroy the family, leaving the member unable to function in the real world or society they were in before joining the cult. People lose all material possessions and "turn over" all of their money for "the group". Our public policy should make it very, very hard for any cult to survive. By enforcing measures on any group who tries to become tax-exempt by way of claiming to be a religion. Every person who is fully involved is brainwashed. The people who are in charge, or in positions of authority in cults are usually con-artists and people who are very good at manipulating and keeping other weaker members dependent on them. ...read more.

That is learning to be a team player, or maybe learning better way of communicating. Also even adopting better eating habits. Nevertheless, one who has experienced the cult life will inevitable say that it was a harrowing experience, at the very least. As has been said, the typical or usual way that a cult keeps such a strong hold on their members is through mind control or "brainwashing". This is done in steps, starting on a low gradient and then through much stronger physical means. For example, demanding the member to work extremely long hours for days at a time. With little or no food, and no pay. In addition to that, the members in charge actually put the member through harassing and frightening them verbally into submission. Sometimes demanding to know why the newer member still has "connections with non-members". This is the final step in ruining the newer members lives by making them cut off all ties with the real world, and trying to make them totally dependent on the cult. Another way a cult may brainwash the newer member is to make them study the cult's own books or literature on an every-day basis. The founder of the cult writes these books. And the books are filled with that particular founder's own words and philosophies of how the group should think, act and be. Many of the books are completely out of touch with reality. ...read more.

And therefore, many people commit suicide after leaving a cult. This is because all of their skills and beliefs and strength they once had before entering a cult have been taken from them, leaving them with nothing to fall back on in the outside world. At the same time, some people persist and benefit from the terrifying experience, "after they leave cults, former members clearly have a boundless spirit and unbeatable will to heal themselves, reclaim their independence and come out on the positive side of horrific experiences?a spirit and a will that I can only admire and uphold, more and more with each person I meet" (Singer 317). In present time society, students and the population, including people of other races and countries and religions are all coming into contact with cults. The government should make it very, very hard for any cult to survive. By placing strict sanctions on any group who tries to become tax exempt by way of claiming to be a religion. The harm that comes to people who fall into cults is overwhelmingly disastrous. Consequently, many lives are destroyed by cults and their harmful ploys. "Institution think is vulnerable in America today. Cultist adherence is disliked and distrusted; it goes against the grain of the American myths of free will, independence, and self-determinism" (Scheflen, 156). Thus, cults, by their very structure are not democratic, do not promote freedom of speech and freedom of expression, and are the antithesis of groups and educational systems in which full human growth can develop. ?? ?? ?? ?? 1 1 ...read more.