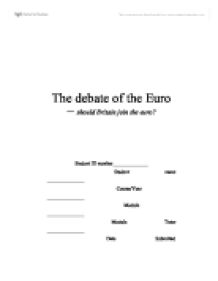 The debate of the Euro - 'Should Britain join the euro?'

The debate of the Euro - should Britain join the euro? Student ID number______________ Student name _______________ Course/Year _______________ Module _______________ Module Tutor _______________ Date Submitted _______________ Introduction Since the Euro appeared, there had been intense debate going on in the United Kingdom. This debate asks whether or not Britain should opt to join the single European currency. The arguments for and against are complex and often confusing, but essentially they fall into two groups. One group claims the case is pragmatic and that no matters of principle are involved; the other claims the opposite, that principle over-rides whatever other advantage there may be. The first group says that entry is purely a question of where Britain's economic interest lies. If it can be shown that the country's material well-being will benefit, then we should go in; if not, not. The second group says that, on the contrary, the very future of the country, its identity and its freedom to make its own decisions as a nation, are at stake, since entry will inevitably lead to a loss of British sovereignty to European institutions. Tony Blair's Labour government belongs to the first group. It has declared that there are no political barriers to entry and that the only tests to be applied are of economic advantage. As Gordon Brown, chancellor of the exchequer, said the government is pro-euro "we believe that - in principle - membership of the euro can bring benefits to Britain." ...read more.

Of course, it is only monetary policy that must be the same throughout a monetary union. The Maastricht rules create a permanent and unqualified prioritization of the control of inflation and place policy in the hands of central bankers, who are by intention less accountable than been in a democracy. This is no accident. It is a deliberate response to the doctrine of policy credibility. Revocable commitments can be revoked, therefore only irrevocable ones are persuasive. Thus the statutes of the European Central Bank can be changed only by the unanimous agreement of every national parliament, and in some cases national referenda as well. What should Britain take into account? The Euro is a very simple change: one currency replaces twelve national ones. But this event comes with a whole series of economic consequences. Much of the attention given to EMU concerns how it would affect the big decisions in the economy, such as interest rates and exchange rates. These are very important. Questions of political sovereignty, federalism or supranational should be considered as well. Pro's of The euro Economically, the main advantage of the single European currency is the fact that it would cause prices to be greatly reduced. At the moment, Great Britain has been given the label of "Rip-off Britain" due to the frequent extortionate prices which we are charged for goods compared to other countries. ...read more.

It will risk being marginalised in the EU if it fails to join within a few years. At present the public opinion in the UK is against joining the Euro, and for keeping the pound. This is entirely natural and understandable. Almost all change is resisted for various reasons, mainly psychological. Fear of the unknown, laziness in trying to avoid the extra the adaptation will require. Other European countries have overcome their inertia and fear, and it may be asked why Britain should be a special case. The fact that the UK is an island adds to the natural reserve of its inhabitants. The British rarely bother to learn other languages, and cross national borders less frequently than their mainland counterparts. Another reason for greater inertia is that the British have had their own currency the pound for much longer than many other European nations, and been invaded and conquered less frequently and less recently. In my opion Britain will join the Euro inevitablly, and Britain has started moving towards it. It is only a question of time how long Britain can afford to remain out of it. Sweden and Denmark also can hardly afford to remain apart from the Euro for more than a few years. Within a few years, the government will be spending its advertising dosh to persuade us that the Euro is a desirable necessity. ...read more.