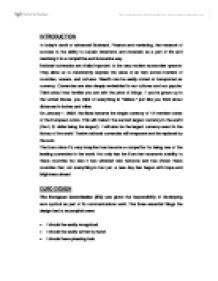 INTRODUCTION In today's world of advanced Business, Finance and marketing, the measure of success is the ability to sustain deterrents and reversals as a part of life and resolving it in a competitive and innovative way. National currencies are vitally important to the way modern economies operate. They allow us to consistently express the value of an item across borders of countries, oceans, and cultures. Wealth can be easily stored or transported as currency. Currencies are also deeply embedded in our cultures and our psyche. Think about how familiar you are with the price of things. If you've grown up in the United States, you think of everything in "dollars," just like you think about distances in inches and miles. On January 1, 2002, the Euro became the single currency of 12 member states of the European Union. This will make it the second largest currency in the world (the U.S. dollar being the largest). It will also be the largest currency event in the history of the world. Twelve national currencies will evaporate and be replaced by the euro. The Euro since it's very inception has become a competitor for being one of the leading currencies in the world. Not only has the Euro lent economic stability to these countries but also it has widened new horizons and has shown these countries that, not everything is lost yet, a new day has begun with hope and brightness ahead. EURO DESIGN The European Commission (EC) was given the responsibility of developing euro symbol as part of its communications work. The three essential things the design had to accomplish were: * It should be easily recognized. * It should be easily written by hand. * It should have pleasing look. There were more then 30 designs drawn up by the EC. Out of these 30 designs, 10 were selected and finally these 10 were narrowed down to two when the public was asked to give in their respective votes for it. ...read more.

The ECB used guidelines established in a Joint Communiqu� that was issued on May 2, 1998, by the ministers of the member states who were adopting the euro. In order not to amend the external value of the European Currency Unit (ECU), they used the bilateral rates of the Exchange Rate Mechanism (ERM) to establish the fixed conversion rate for each national currency. The calculation of the exchange rates followed the regular daily concertation method, which used the representative exchange rate for each nation's currency against the U.S. dollar as of December 31, 1998. Exchange Rate Mechanism (ERM) The ERM links currencies of non-participating countries to the euro as of January 1, 1999, as they stood on the first day of stage three of the changeover. It uses fluctuations of plus or minus 15 percent as the basic rule. European Currency Unit (ECU) This refers to the basket currency that was made up of the weighted value of each of the 12 member states national currencies as of the signing of the Maastricht Treaty in February 1992. The ECU was replaced by the euro on January 1, 1999. The initial value of the euro was 1-to-1 with the ECU. Here are the recognized values. One-Euro Equals: Belgian franc 40.3399 Italian lira 1936.27 Greek drachma 340.750 Dutch guilder 2.20371 French franc 6.55957 Deutsche mark 1.95583 Portuguese escudo 200.482 Spanish peseta 166.386 Irish punt 0.787564 Luxembourg franc 40.3399 Austrian schilling 13.7603 Finnish markka 5.94573 WHERE THERE IS A WILL THERE IS A WAY On January 1, 1999, the euro was established as the official currency of the 12 participating member states of the European Union. The conversion rates were "irrevocably fixed," and the euro officially "existed." At that point, the euro could be used for non-cash transactions, such as making electronic payments, writing checks, or credit transactions. In majority of cases the balances were shown both in the national currency as well as in the converted euro amounts. ...read more.

It was very successful, but just as with the ECSC; it served more of a peacemaking role between the European nations than an economic role. At that time the monetary exchange rate between countries was controlled by the Bretton Woods system, which connected currencies to the U.S. dollar, allowing for only a one-point variation around designated values. This was referred to as the "pegged rate" and was based partly on the gold backing of the dollar. This system worked well for 20 years, helping to stabilize exchange rates and restore economic growth in the postwar period. By 1960, however the structure began to fail and exchange-rate agreements became the prevalent topic among European political and economic leaders. By December 1969, Luxembourg's Prime Minister, Pierre Werner, was asked to write an EC (European Community) report covering the need for a complete monetary union among the European economies. The Werner Report came out in 1970 and specifically brought up the idea of a single European currency as part of a cooperative monetary effort. The report was the first to use the term Economic and Monetary Union. Although this plan seemed promising, it lost momentum when President Nixon's 1971 policy of "benign neglect" ended U.S. backing (by its gold reserves) of the predefined exchange rates against the dollar, collapsing the Bretton Woods system. Other overseas central banks were not willing to support the dollar, which would have provided the equivalent of deposit insurance. So where did that leave the European countries when it came to the stability of their currencies? It brought about the development in 1979 of the European Monetary System (EMS), which locked exchange rates among the participating countries into predefined trading zones. This was known as the Exchange Rate Mechanism (EMS). This move, in itself, stabilized the economy by creating predictable trading zones. The next move toward a unified European economy came with the 1987 Single European Act. This act called for the systematic removal of barriers and restrictions that hampered trade between European countries. As a result, border checks, tariffs, customs, labor restrictions and other barriers to free trade were dismantled. ...read more.