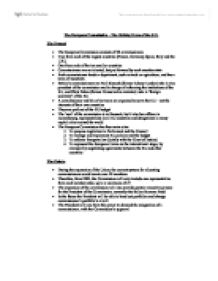 The European Commission - The Driving Force of the E.U.

The European Commission - The Driving Force of the E.U. The Present * The European Commission consists of 20 commissioners * Two from each of the largest countries (France, Germany, Spain, Italy and the U.K.) * One from each of the ten smaller countries * Commissioners are not elected, but put forward by each member state * Each commissioner heads a department, such as trade or agriculture, and has a team of assistants * Britain's commissioners are Neil Kinnock (former Labour Leader) who is vice president of the commission and in charge of reforming the institutions of the EU, and Chris Patten (former Conservative minister) who is 'foreign secretary' of the EU * A commissioner and his or her team are expected to serve the EU - not the interests of their own countries * They are paid out of the EU budget * The 'seat' of the commission is in Brussels, but it also has offices in Luxembourg, representations in all EU countries and delegations in many capital cities around the world * The European Commission has four main roles: 1. ...read more.

Parliament may: 1. Amend and debate legislation 2. Require the European Council to have unanimity on legislation 3. Veto the EU budget 4. Check the work of the European Commission * Overall, the European Parliament's power (legislative and financial) has increased from its origins, however member states are reluctant to extend power The Future * The Nice Treaty (2000) will limit the number of MEPs to 732 * The redistribution of seats will take place in the 2005 election * The proposed re-distribution will limit the seats available to the UK. The number of MEPs will be reduced to 72, 15 less than previously * The council will also gain power to regulate organisations or political parties at European Level. The European Council and The Council of Ministers The European Council * The European Council is the most important decision-making body in the EU * It is made up of the Prime Minister and the Foreign Secretary of all member states, both of whom can be held to account by their parliament and electorate * The EC meets twice a year * It makes the major decisions (e.g. ...read more.

The number of votes allocated to each country will also change, although talks about this in December 2003 broke down - Poland and Spain refused to accept changes to the system agreed in 200 which gave them almost as many votes as Germany, even though each of their populations is around half the size of Germany's. Official Language The number of languages European Commission employees are required to speak to be eligible for promotion is to be increased to 3 - their mother tongue plus two further EU languages instead of just one. The change will come into force in May when the new member states join, and will increase the cost of language training for the Commission to 5 million Euros per year. The extra foreign language will be required because the French are worried that English is becoming the new official language of the EU - 83% of new staff form the countries joining in May speak English, but only 24% speak French. ...read more.