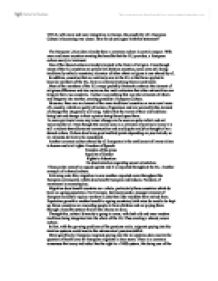 The European Union does already share a common culture in certain respect. With more and more countries wanting the benefits that the EU provides, a European culture surely is imminent

TITLE; with more and more integration in Europe, the possibility of a European Culture is becoming ever closer. How far do you agree with this statement? The European Union does already share a common culture in certain respect. With more and more countries wanting the benefits that the EU provides, a European culture surely is imminent. One of the shared cultures already tolerated is the factor of religion. Even though many of the EU countries are primarily Christian countries, some even still being traditionally catholic countries; tolerance of other ethnic religions is one shared by all. In addition, countries that are relatively new to the EU or that have applied to become members of the EU, have an extremely strong Islamic sentiment. .Most of the members of the EU except probably Denmark embrace the element of religious difference and also welcome the multi-culturism that other nationalities can bring to their own countries. Culture is something that can take elements of others and integrate into another, creating possibly a European Culture. However, there are an element of the more traditional countries or more rural areas of a country, which are guilty of r****m of ignorance and are worried by the element of change that integration will bring. ...read more.

In fact, with the growing problems of the pensions crisis, migrants paying into the taxation systems could resolve the astronomical pensions deficit. More specifically, European migrants paying into the tax systems does resolve the question of health care for European migrants in later years. There is a common consensus that every individual has the right to a NHS system, this being one of the most important common factors of the European Union, again an already shared culture. Even though the countries of the European Union seem together on the basics of a civil, integrated, shared culture, there are some differences. Language is the major difference, which will never be a shared, common culture. The British are the most guilty and ignorant to the language problem. Many other Europeans have an extremely good knowledge of the English language, but sadly, the British have a cavalier attitude and A "why should we" approach, a shared British culture but not a shared European culture. Another problem that seems to be occurring throughout the EU is the more common integration of the Eastern Europeans from previous communist states. ...read more.

The patterns of the British do seem to enjoy the more social aspects of the Europeans, modernisation of the licensing laws probably being the most recent change towards the rest of Europe. The more popular traditional British foods are being replaced by more European and international menu's: family values and the idea of the family once again becoming an important part of British life, a concept never lost in the majority of other EU countries. Probably the most important factor that all Europeans do share is the need and the expectation of peace and the prevention of war, a culture that is becoming increasingly important with the younger generations of citizens. A United States of Europe does seem to be quite close but again the British relationship with the United States of America seems to be hindering the acceptance of the UK into the United States of Europe. In conclusion, there does seem to be a balanced argument with no majority towards a yes or no to the title statement. More trust is needed with the UK, the willingness of gradual change among all EU countries. As future generations take over from the present European population, I do believe that a European Culture will be the norm and part of everyday life. Word count 1,177 ...read more.