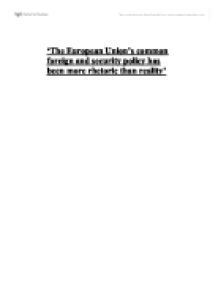 'The European Union's common foreign and security policy has been more rhetoric than reality' Introduction The treaty on the European Union stated that 'The Union shall define and implement a common foreign and security policy covering all areas of foreign and security policy'1 The European Union is an absolute and ineffable power of the Western world comprising of twenty-five member states and is home to four hundred million people. The CFSP was established under the Treaty of Europe, which was signed at Maastricht in 1992, (and was then further developed in the Treaty of Amsterdam in 1997) with the aim of protecting the interests of these member states. Five key principles are integral to the operation of the CFSP. These are to '(1) safeguard the common values, fundamental interests, independence and integrity of the Union in conformity with the principles of the United Nations charter, (2) To strengthen the security of the Union.... (3) To preserve peace and strengthen international security...(4) to promote international co-operation, (5) to develop and consolidate democracy and the rule of law, and respect for human rights and fundamental freedoms'.2 What shall be examined here is whether this theory can be successfully translated into practice i.e. ...read more.

introduced much needed reforms, which introduced measures to improve and maintain increased levels of success of the CFSP. One of the biggest breakthroughs with relation to the success of the CFSP was the appointment of a permanent HR. The CFSP may have experienced problems and deemed to be inherently weak by its critics but the policy is gaining support. According to recent evidence7 public opinion is moving towards its acceptance. 65% of EU member states ( the original 15 countries) are in support, while more than two-thirds - 68% of those polled in the new accession states are in favour of the CFSP. Inherent Flaws of the CFSP. It is only since the 1990's that the CFSP has gained recognition as an accepted issue within EU politics. The UK and France currently hold tow of the permanent seats on the UN Security Council. In order for CFSP to work, there should only be one seat, and this would require both countries to resign their seats.8 This is something that they are allegedly reluctant to remedy, as no discussion has yet happened over this issue, and according to the UN there is no plan to amend the current situation. ...read more.