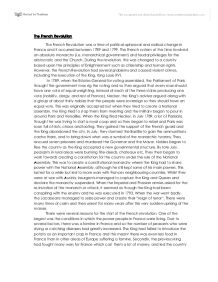 The French Revolution The French Revolution was a time of political upheaval and radical change in France and it occurred between 1789 and 1799. The French system at the time involved an absolute monarchy (i.e. monarchical government) and feudal privileges for the aristocratic and the Church. During the revolution, this was changed to a country based upon the principles of Enlightenment such as citizenship and human rights. However, the French Revolution had several problems and caused violent crimes, including the execution of the King, King Louis XVI. In 1789, when the Estates-General for voting assembled, the Parliament of Paris thought the government may rig the voting and so they argued that every man should have one vote of equal weighting, instead of each of the three states producing one vote (nobility, clergy, and rest of France). Necker, the King's advisor argued along with a group of about thirty nobles that the people were sovereign so they should have an equal vote. This was originally accepted but when they tried to create a National assembly, the King tried to stop them from meeting and the military began to pour in around Paris and Versailles. When the King fired Necker, in July 1789, a lot of Parisians thought he was trying to start a royal coup and so they began to rebel and Paris was soon full of riots, chaos and looting. They gained the support of the French guard and the King abandoned the city. In July, they stormed the Bastille to gain the ammunitions cache there, and to bring down what was a symbol of the monarchic tyranny. They rescued seven prisoners and murdered the Governor and the Mayor. Nobles began to flee the country as the King accepted a new governmental structure. By late July, peasants in rural areas were burning title-deeds, chateaux etc. They then began to work towards creating a constitution for the country under the rule of the National Assembly. ...read more.

The Industrial Revolution The Industrial Revolution occurred during the nineteenth century when the industry of Britain boomed along with other countries around the world. There are several reasons for the commencement of this revolution and many of them are still debated. These reasons include several areas. As there was more border control, there were fewer endemics and more children lived past infancy, meaning that the number of people seeking employment was increasing. As there had been several movements to increase the efficiency of farming, the people who could not get farming employment had to move into the cottage industries like lace making. The world had become more colonial in the 17th century, leading to more opportunity for international trade and the creation of the concept of an economy. Finally, the use of patents had been introduced, meaning the inventors could m0onopolise the market and so encouraged more people to try to invent items. There are also several reasons to explain why Great Britain began its Industrial Revolution before the other countries. Britain received a lot of natural and financial resources from its overseas colonies in Africa etc. Britain is said to have more liberal trade for a merchant than other countries. As Britain had large cottage industries, it ensured markets were already available for many early forms of manufactured goods. Also any conflict tended not to be fought on British soil due to its status as an island and so it was not disturbed by wars as other countries were. Another reason was that there were many resources in Britain that could be used easily to expand the industry. Finally, the political situation in Britain was fairly stable and there was more acceptance of change than some countries. There are several inventions connected with the start of the Industrial Revolution in Britain. The cotton spinning wheel led onto the cotton mills to increase production. ...read more.

* Women were to work no more than 56 hours per week The middle classes were also given more opportunity to play a part in politics during the nineteenth century. However, the working classes were not represented. Thus, Chartism was born. It was an ideology calling for political reform. They wanted to vote by ballot, have annual Parliament, pay MPs, allow MPs without land etc. It gained support quickly in the poorer classes but died out when the leaders became divided. The factory owners were gaining lots of wealth and the working class was gaining none of it. Hence, socialism was born. Socialism grew during the 1800s as a reaction to the Industrial Revolution. It was preaching more state influence, equal rights, and an end to inhumanity, which was strongly opposite to the laissez faire politics of the government. While industrialists did not want any change, workers and intellectuals wanted a complete change in society. The socialism Thus all of the revolutions such as price revolution, agricultural revolution, technological revolutions and the economic revolutions all became loosely known as the Industrial Revolution. It began in Britain and soon encompassed whole of Europe and changed the world forever. The period was marked by transformations of European agricultural, technological, and manufacturing and production capabilities had a significant impact of the social, economical and political landscape of Europe and soon changed the world as we know it. The environmental damages during the period were widespread and led to vast reforms as new green movements emerged in the 20th century. Social life was changed as women left the homes to work and provide for families and the working conditions slowly improved. Businesses and industries saw the formation of unions and worker's rights groups that promoted better wages and working conditions in Europe. New transportation and communication lines linked Europe and Americas to the rest of the world and helped to bring about new radical political ideologies. Overall, the Industrial Revolution was a process that can never be reversed and completely transformed every aspect of life in Europe and the world. ...read more.