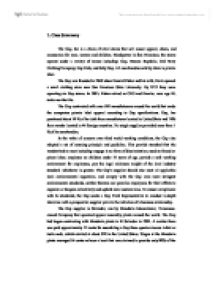 1. Case Summary The Gap, Inc is a chain of retail stores that sell casual apparel, shoes, and accessories for men, woman and children. Headquarter in San Francisco; the stores operate under a variety of names including: Gap, Banana Republic, Old Navy Clothing Company, Gap Kids, and baby Gap. All merchandise sold by chain is private label. The Gap was founded in 1969 when Donald Fisher and his wife, Doris opened a small clothing store near San Francisco State University. By 1971 they were operating six Gap stores. In 1995, Fisher retired as CEO and Drexler, now age 50, took over the title. The Gap contracted with over 500 manufacturers around the world that made the companies private label apparel according to Gap specifications. Gap, Inc purchased about 30 % of its cloth from manufacturer located in United State and 70% from vendor located in 46 foreign countries. No single supplier provided more than 5 % of its merchandise. In the wake of concern over third world working conditions, the Gap also adopted a set of sourcing principle and guideline. This provide standard that the vendors had to meet including: engage in no form of discrimination, used no forced or prison labor, employee no children under 14 years of age, provide a safe working environment for employees, pay the legal minimum weight of the local industry standard- whichever is greater. The Gap's supplier should also meet all applicable local environmental regulation, and comply with the Gap own more stringent environmental standards, neither threaten nor penalize employees for their efforts to organize or bargain collectively and uphold local custom laws. ...read more.

Union is legitimate countervailing means for balancing the power of the large corporation so that the worker in solidarity with other worker can achieve an equal negotiating power against the corporation. The union achieves equality between worker and employer so the workers right can be secure and treated as a free and equal person in job negotiation with powerful employers. Unions have to right to strike derive from the right of each worker to quit his or her job at will so long as doing so violates no prior agreement or the right of others. Union strike are therefore morally justified so long as the strike does not violate a prior legitimately negotiated agreement not to strike (which the company might have negotiated with the union) and so long as the strike does not violate the legitimate moral right of others (such as citizen whose right to protection and security might be violated by strikes of public workers such as firefighter or police) 3.2. The firm duties to the employee The basic moral obligation that employer has toward employees, according to the rational view of the firm, is to provide them with the compensation they have freely and knowingly agreed to receive in exchange for their services. They are two main issues related to this obligation: the fairness of employee working conditions and the fairness of wages. 3.3. Wages From the employees point of view, wages are the principal (perhaps the only) ...read more.

It should not only focus on profit, but also to the person. The Gap already has the Gap Sourcing principle. Mandarin international as Gap supplier which has committed to the Gap Sourcing Principle and Guideline has the full responsibilities to treat their workers fairly. The suppliers also have the responsibility to the Gap for their action to their workers. Conclusion - The Gap isn't directly applying unethical business behavior, but as a company who sub contracted the product to Mandarin International it has social responsibility to the mandarin employee who make Gap product. - The Gap should make sure the entire supplier fulfills its sourcing principle and guidelines. The supplier which doesn't implemented the entire Gap standard and the local government standard, the Gap should avoid doing business with them. - Mandarin International done unethical business by not allowing their employee to make union (fired all the union members) and all the unethical behavior toward the employee. Recommendation - The Gap should choose their supplier carefully and maximize the Gap field representative by put an eyes and do the regular inspection not only when they start the business but always monitoring the working and social condition of the supplier to comply with the Gap code of conduct and also the local government laws. - The Gap representative officer should do the interview without being known by the Mandarin International, so the employee would be freely to speak about what really happened in the factory. - The Gap should give more effort to increase the quality of live their supplier employee which usually in the third world by giving education or other benefit. ...read more.