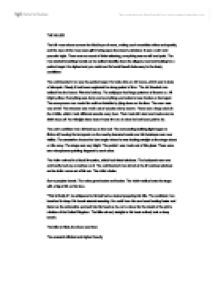 THE KILLER The full moon shone across the thick layer of snow, making each snowflake shine and sparkle, and the rays of the moon were glimmering upon the steamy windows. It was a calm and peaceful night. There was no sound of birds twittering, everything was so still and quiet. The man started breathing heavily as he walked steadily down the slippery road and looking for a perfect target. He sighed and you could see his horrid breath fade away in the frosty conditions The cold-hearted man saw the perfect target. He broke into an old house, which was in state of disrepair. ...read more.

The surrounding building light began to flicker off, leaving the lampposts on the nearby deserted roads now his footsteps were now visible. The assassins choose the best angle where he was looking straight at the stage about a mile away. The stage was very bright. The podium was made out of thin glass. There were tow microphones pointing diagonal to each other. The victim arrived in a black limousine, which had tinted windows. The bodywork was new and hardly had any scratches on it. The cold-hearted man aimed at the limousines windows as the victim came out of his car. The victim shoke Some peoples hands. ...read more.

The crowed gasped loudly. The killer took time to watch the prey die, showing no remorse. The murderer put his rifle back into his black leather bag, jumped down and landed on thirty centimetres of thick snow. He rapidly got his balance back and ran straight to his car started his engine, pressed the accelerator all the way down. He went into a dark ally way where he saw starving cats crawling through bins looking for scraps of food that people had chucked out. The killer stopped. Soon after he weren't seen By this time the ambulance had arrived at the scene. The prime minister was lying dead on a stretcher, with his wife holding his cold pale hands crying over someone that she had loved and cared for.... THE END ...read more.